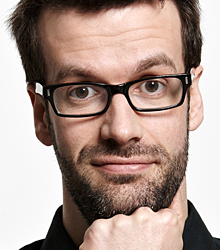 Marcus Brigstocke is regarded as a major comedy, writing and acting talent, performing award-winning stand up nationally to sell-out audiences.

His comedy career took off after winning the 1996 BBC New Comedian of The Year at the Edinburgh Festival. Having failed to get into drama school, Marcus took up a place at Bristol University, when his best friend said to him “you’re funny, you should do comedy”. That same friend entered him into a stand-up competition — in which he came second — and he hasn’t looked back since.

In 2006, Marcus spent time in France for 'Excuse My French' in which he had four weeks to learn the language, almost from scratch, then perform stand up in French to audiences in Marseille and Paris.

BBC Radio 4 has become somewhat of a second home to Marcus with regular appearances on I’m Sorry I Haven’t A Clue, The Now Show and Just A Minute; he has written and recorded three series and four specials of his hit show Giles Wemmbley-Hogg Goes Off. More recently, he co-starred alongside Kerry Godliman, in The Wilsons Save The World.

Marcus has notched up an impressive list of TV credits including his role as team captain on Argumental (Dave), and host of The Late Edition and I’ve Never Seen Star Wars (BBC Four). Other appearances include; Live At The Apollo (BBC One), Have I Got News For You (BBC One), Mock the Week (BBC Two), QI (BBC Two), Sorry I’ve Got No Head (BBC One), The Late Edition (BBC Four), and the 11 O’Clock Show (Channel 4). He also starred in The Joy of Tech (Dave), alongside best friend and fellow entertainer, magician Alexis Conran.

Marcus's small screen acting work includes playing the lead character Adam Savage in Simon Nye's BBC1 sitcom 'The Savages', and another leading role in BBC3's 'Vacant Possession', (Twisted Tales). Not to mention the brilliant self-promoting TV Historian David Oxley (BA Hons) in 'We Are History', a cult success that bought him to the attention of many an adoring fan and almost as many dismayed archaeologists.

On the big screen, Marcus appeared in Richard Curtis' movie 'Love Actually' as a Radio DJ interviewing the hilariously jaded Billy Mack (Bill Nighy). He went to Berlin with Kevin Spacey to film 'Beyond The Sea' - the life story of Bobby Darin. And in ‘Piccadilly Jim' Marcus appears with Sam Rockwell and Tom Wilkinson as 'man having sex under stairs', a small but vital role!

Marcus has also found himself treading the boards of the West End with a critically acclaimed performance as King Arthur in Monty Python’s Spamalot and as Station Master Perks in E.Nesbit’s The Railway Children at London’s Waterloo Station. In 2017, he played the lead in a revival of Barnum at London’s Menier Chocolate Factory. For the role, Marcus learnt specialist circus skills including magic and walking a tightrope

2007-08 saw Marcus travel to the Arctic with Cape Farewell to see for himself the effects of climate change, working with a team of scientists to discover the pace of change and discuss the impacts of Global Warming and how to lessen them.

The first voyage in 2007 sailed 1300 miles from Norway along the 78th parallel to the East coast of Greenland and was terrifying, particularly when he found himself in the water with Polar Bear. The 2008 voyage was a journey up the East coast, researching, exploring and spending time getting to know the Inuit people of Greenland. This second trip was easier on a larger Russian research vessel with a 30 strong group of scientists, thinkers, activists, artists and musicians including KT Tunstal, Jarvis Cocker and Martha Wainwright.

Marcus’ book ‘God Collar’ (2011), is based on his award-winning Edinburgh and West End show; a scathing look at modern faith that will leave you laughing out loud and examining your own beliefs in equal measure.

Marcus Brigstocke is an active campaigner for environmental awareness and action as well as his ongoing involvement with Cape Farewell, War on Want and the 'Campaign Against Arms Trade'.

Whether he’s performing stand-up comedy after a dinner, or hosting a glitzy corporate awards evening, Marcus Brigstocke is the master of satirical comedy and a veteran of the comedy circuit.

He has proved to be blisteringly funny with spot-on observations over a wide range of topics including; climate change, religious extremism, ‘The Big Society', immigration, Brexit, loans companies, the special relationship, the banking crisis and recession, compensation culture, women's magazines, The EU and David Blaine, not to mention his own personal battle against his middle class roots.

Highly experienced and a consummate professional, whatever event you’re tasked with organising, Marcus Brigstocke is guaranteed to make your night!

Just wanted to drop you a note to say thanks. Marcus Brigstocke went down a treat with our guests, and we had a lot of positive feedback on the night. I think he struck a good balance between the straight compering side of things, and the comedy side. He did a great job!

We LOVED Marcus Brigstocke - what a lovely guy! It was a treat to meet him and we had great feedback from everyone - he was spot on and very funny. Thank you so much for all your help and patience Neil - very much appreciated.

Rare is the stand-up show that makes you laugh, think and then fight back the tears. This is it!

Just want to say thanks very much for arranging Marcus Brigstocke's visit yesterday. It was an overwhelming success and he was incredibly nice, funny and engaging, and even stayed on past the allotted time to talk to people so all in all very pleased.

Marcus Brigstocke is one of the cleverest and most engaging stand-ups you'll see!

Clients often ask about purchasing books for giveaways and delegate packs. Below you’ll find a selection of products by Marcus Brigstocke. Click the images to view on Amazon's website. For bulk orders, please speak with your Booking Agent.

How to book Marcus Brigstocke for your event