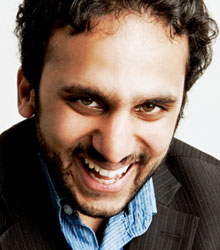 Critically acclaimed comic, Nish Kumar, is recognised from... well, just about everywhere these days. Host of BBC Two's satirical show The Mash Report, Nish is a fast-rising star of British comedy and was nominated for the Foster's Edinburgh Comedy award in both 2015 and 2016.

Formerly part of a double act, Gentlemen of Leisure, with a university friend, the duo performed at the Edinburgh Fringe for the first time in 2012. Nish has also received nominations for Best Show at the 2013 Leicester Comedy Festival & Breakthrough Act at the 2014 Chortle Awards.

In 2014, along with four other specially selected comics, Nish embarked on a tour of India with the Melbourne International Comedy Festival Roadshow India and is regularly booked for performances worldwide.

Since then, Nish has created and performed further sell-out shows and regularly appears on topical TV programmes such as Have I Got News For You, Mock The Week, Newsjack and even the BBC’s political debate programme Question Time.

He has also appeared on the likes of QI, Live At The Apollo (both as a stand-up guest and host), The John Bishop Show, 8 Out of 10 Cats Does Countdown, Russell Howard's Stand-Up for Central, Drunk History, The Alternative Comedy Experience & Live At The Comedy Store. Most recently Nish starred alongside fellow comic Joel Dommett in a 6-part travelogue for Comedy Central, Joel and Nish vs The World.

How to book Nish Kumar for your event