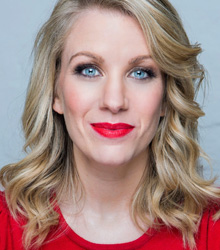 Rachel Parris is an actress, award-winning comedian and musician. As a musical comedian she has reached the finals of national competitions including Leicester Square New Comedian and Hackney Empire New Act of The Year as well as being placed runner-up in the Funny Women Awards and the Musical Comedy Awards.

Rachel was named in London Is Funny among their Top 10 Comics To Watch in 2012, and recently listed on the Huffington Post as one of their Funniest 50 Women on Twitter. She is also an experienced improviser, and is a founding member of the award-winningimprov comedy smash hit Austentatious, an Edinburgh Fringe sell-out show, with a residency in London's West End and has been broadcast on BBC Radio 4. Rachel has also improvised with The Beau Zeaux, The Bishop, Monkey Toast and the Comedy Store Players.

On stage she has acted in the popular comedy show Death Ship 666 at the Jermyn Street Theatreand in 30 Christmases at the Old Fire Station in Oxford, alongside Jonny Donohoe. She recently played Martha in The Real Horror Show at Leicester Square Theatre.

Rachel Parris writes for the comedy section of the Huffington Post and for London Is Funny.

How to book Rachel Parris for your event