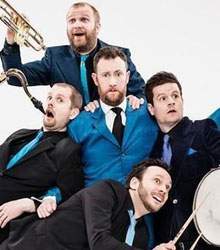 Book The Horne Section
add to shortlist
About

The Horne Section bring together stand-up and live music in a free-wheeling and spontaneous combination in the form of five professional musicians led by creator and co-host of BAFTA and Emmy-nominated hit series Taskmaster, Alex Horne.

Alex Horne Presents: The Horne Section played to sold-out audiences for five consecutive years at the Edinburgh Fringe, and continued for three series as a BBC Radio 4 show. This led to The Horne Section Podcast, which reached number one in the iTunes charts on the first day of its release and has featured many celebrity guests including Al Murray, Katherine Ryan and Tim Vine.

Firm favourites in 8 Out of 10 Cats Does Countdown’s Dictionary Corner, they have also appeared on The Last Leg, Never Mind the Buzzcocks, and their one-off special The Horne Section Television Programme recorded at the London Palladium.

In 2020, they starred alongside some of the biggest names in music and sport as the house band in Peter Crouch’s Save Our Summer. Most recently, they have been entertaining crowds across the nation with their biggest tour to date: That’s How I Like My Tour.

A beguiling blend of the smart and stupid....a real delight.

This is a thought-provoking, anarchic and wildly entertaining welding of stand-up comedy and big band music.

They’re pretty much the funniest thing in musical comedy.

How to book The Horne Section for your event

Tags for The Horne Section