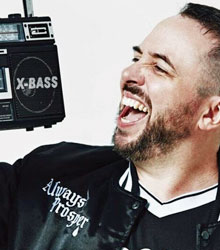 Book Abandoman
add to shortlist
About

Welcome to the world of Ireland’s finest hip hop musical comedian, Rob Broderick, AKA Abandoman. Using his trademark blend of audience interaction and razor-sharp improvisation, Abandoman will take you on a magical journey, transforming the audience’s likes, loathes and daydreams into hit songs and captivating tales.

2012 saw Abandoman support multi-platinum artist Ed Sheeran on his sell-out UK tour that culminated in two nights at London's Brixton Academy; in February this year, Abandoman performed in Australia for the first time, where the show was nominated for the two comedy awards at the Adelaide Fringe Festival (“Best Comedy” and “Best Comedy Newcomer”) and won the latter.

Abandoman has appeared on BBC3′s Live at the Edinburgh Fringe Festival, BBC2′s The Stephen K Amos Show, on Sky Arts as part of their Latitude coverage and many radio shows, including BBC Radio 1′s Fun And Filthy Cabaret, alongside Dappy from N Dubz. He performed in the house band for Alan Carr's Happy Hour on Channel 4 alongside Craig David, played the part of Dictionary Corner in 8 Out of 10 Cats Does Countdown, as well as supported and toured with pop behemoth Ed Sheeran.

The show has recently appeared at festivals such as Bestival, Latitude, Altitude, Rockness, Glastonbury, Hop Farm, V Festival. They performed at the 2010 Brits after-party, Daisy Lowe's 21st birthday party, hosted the 2012 St. Patricks Day event in Trafalgar Square and have opened for numerous comedy and music acts such as Micky Flanagan, Tommy Tiernan and DJ Yoda.

How to book Abandoman for your event