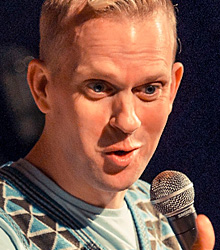 Robert White is the only gay, aspergic, quarter-Welsh comic on the British comedy circuit. Known for his brilliant timing and performance style, Robert’s chaotic stage presence, improvisational skills and delivery won him the 2010 Malcolm Hardee Award for Comic Originality.

Since he first came onto the stand-up scene, as a finalist in the prestigious Hackney Empire Competition, Robert White has gone from strength to strength. He is now a sought-after act who regularly performs across the country and internationally. His off the wall jokes, improvised songs, barely-believable stories and interactive music stand him far apart from the usual choice of available comedy.

Robert took his brilliant comedy-opera InstruMENTAL to the Edinburgh Fringe in 2017, astounding audiences with the show's hilarious lyricism and musical ingenuity.

In 2018, Robert took part in the UK’s biggest TV talent competition Britain’s Got Talent. With a performance that was typically chaotic and hilarious he wowed all four judges — despite insulting all of them on numerous occasions — propelling him through the audition and semi-final rounds to the live final where he was the series runner-up to fellow comedian Lost Voice Guy.

Robert White is a versatile performer who performs both musical comedy or straight stand-up and can also host the whole event.

Robert White is a sought after stand up comedian who regularly performs in big clubs, little clubs, those in-between clubs, as well as corporate events and festivals around the UK, and sometimes abroad too.

He is a versatile performer who performs both musical comedy or straight stand-up and can also emcee / host the whole event.

You're a beautiful soul. Comedy flows from you like water.

How to book Robert White for your event

Mime with noise, stand-up with no talking – drama with no acting.

Mime with noise, stand-up with no talking – drama with no acting.