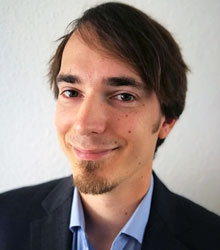 Michael Barton is a Ecommerce Data Analyst and sought-after keynote speaker on autism and neurodiversity. Data analysis involves lots of number crunching and programming, using tools such as Microsoft Excel, SQL, BigQuery and Google Analytics, all of which makes great use of his exceptional attention to detail.

In 2014, Michael completed his Physics degree at the University of Surrey. A subject that is ideally suited to him due to his logical and analytical way of thinking. Many individuals on the spectrum exhibit this way of thinking and scientists are often said to have autistic traits — characteristics that autistic people show, however are not exclusive to them.

Michael’s degree included an industrial year placement as part of his sandwich course (no food involved!) at the Brunel Innovation Centre near Cambridge. They research ultrasound monitoring and his main job was using MATLAB, a common programming language, to find new ways to process and interpret the signals. He found that the work involved suited his skill set very well.

Michael is the author of two published books. It's Raining Cats and Dogs: An Autism Spectrum Guide to the Confusing World of Idioms, Metaphors and Everyday Expressions examines how the English language can be extremely confusing and illogical, especially for people with an autism spectrum disorder (ASD) who interpret meaning in a very literal way.

Why should an announcement that cats and dogs are falling from the sky indicate heavy rain? And what have chickens got to do with being a coward? It's Raining Cats and Dogs is a witty and stylish insight into the mind of someone with an ASD. It beautifully illustrates why people with ASDs have problems understanding common phrases and idioms that others accept unquestioningly as part of everyday speech.

His 2014 follow-up, A Different Kettle of Fish: A Day in the Life of a Physics Student with Autism, provides the reader with further insight into the complexities of our use of language and how it is assumed we understand the illogicality of ambiguous expressions. The book describes Michael’s journey through a day out in London, with all the pitfalls of potential miscommunication, and is a voyage of self-discovery as Michael addresses his autism head-on and finds his place in the world.

In his spare time, Michael Barton is an accomplished musician, playing jazz piano, bass guitar, drums and percussion (including spoons) with a variety of bands. On top of that he is a black belt in judo and enjoys skiing and rock climbing.

He is also patron of CASPA - Life with Autism - a charity based in South East London that runs youth clubs for young people on the autism spectrum.

Michael Barton is an experienced and sought-after public speaker on autism and Asperger’s Syndrome, giving keynote talks at conferences, seminars, workshops, festivals, schools and training sessions about his experiences of being at the high functioning end of the autistic spectrum.

Under the broad umbrella of diversity and inclusion, his talks encourage autistic people to focus on their strengths and help neurotypical people (those that aren't autistic) to understand them better and therefore accommodate them to a greater extent. Michael considers himself to be in between the neurotypical and autistic worlds, and thus can act as an interpreter between the two.

Spotlighting the positive aspects of autism from his lived personal experiences, Michael’s talks are always very well received and he covers a wide range of topics; from strategies to help overcome difficulties he’s faced, to the world of employment and most of what's in between. He also talks about how he uses many of his autistic traits to his advantage and explores the notion that being "normal" isn't necessarily what we want to achieve.

This was a thoroughly engaging and eye-opening discussion of the topic presented with a mix of humour, self-awareness and candour where Michael shared a range of insights into his own life experiences.

Really informative and valuable for us to hear.

Super insightful, thank you so much Michael.

This has been amazing, thank you Michael. Lots of great insight to take forward and help boost employment percentage [for autistic people].

Thank you so much Michael, what a wonderful talk. The world would be a much better place if all employers could see the benefits of having diverse thinking in the workplace just by making a few reasonable adjustments.

Clients often ask about purchasing books for giveaways and delegate packs. Below you’ll find a selection of products by Michael Barton. Click the images to view on Amazon's website. For bulk orders, please speak with your Booking Agent.

How to book Michael Barton for your event