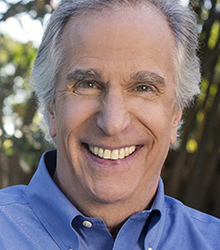 With his slicked-back hair, blue jeans and black leather jacket, Henry Winkler was the epitome of cool, and became known around the world for his portrayal of The Fonz on hit American sitcom Happy Days.

Henry has enjoyed over four decades of success in Hollywood and continues to be in demand as an actor, producer and director. Currently, he co-stars as acting teacher Gene Cousineau on the hit HBO dark comedy Barry, alongside Bill Hader. The role garnered him an Emmy Award for Best Supporting Actor in a Comedy in September 2018.

Born in New York City, Henry's parents emigrated from Germany to the USA in 1939 before the beginning of World War II. He made his acting debut as Billy Budd in the eighth grade at the McBurney School for Boys in New York City. During his high school and college years, he studied in Lausanne, Switzerland and worked in a lumber mill in a small German town.

Henry struggled with academics throughout his childhood, dealing with what would today be identified as dyslexia. So, whilst millions of teenage Happy Days fans watched in envy as he sat astride his gleaming Harley-Davidson and, with just one wink, had girls flocking around him, the reality was completely different.

Henry couldn't actually ride the bike because his co-ordination was so poor — one symptom of dyslexia — a condition that crippled him since childhood and remained undiagnosed until he was 35. Instead, the Harley was mounted on a piece of wood on wheels and pulled along for action scenes.

Graduating from College and later receiving a Masters from Yale's School of Drama, Henry Winkler's acting career began with appearing in over thirty TV commercials. Then, in 1974, he landed the role which would change his career path and go on to make him a global household TV star — that of Arthur 'Fonzie' Fonzarelli on ABC's Happy Days — as he became the worldwide epitome of cool.

During his 10 years on the popular sitcom, Henry won two consecutive Golden Globe Awards for Best Actor in a Comedy Series (1976 and 1977), was nominated three times for an Emmy Award and was also honoured with a star on the Hollywood Walk of Fame. Both his famous leather jacket and Fonzie's lunch box became part of an exhibit at the Smithsonian Museum in 1980.

In the 1980's, Henry began producing many television shows, while at the same time appearing in films such as The Waterboy and Scream. In recent years, he appeared in a number of series, including Arrested Development, Children's Hospital, Royal Pains, New Girl and Parks and Recreation. He also starred and co-executive produced the NBC Reality travel series Better Late Than Never with William Shatner, Terry Bradshaw, George Foreman and Jeff Dye, and is an executive producer of the revised MacGyver series.

Henry Winkler is also a New York Times best-selling author. In 2003, together with his writing partner Lin Oliver, they became best-selling authors with their children's book series, Hank Zipzer – The World's Greatest Underachiever. The books were inspired by Winkler's struggle throughout his education due to his learning challenges. To date, they have written 34 children's novels. Their latest is Here'S Hank: Everybody is Somebody. All the books are sold online, in bookstores around the world and have been published around the world in seven languages, with more than 4 million copies sold.

In 2011, he published a collection of anecdotes and heartfelt observations, I Never Met an Idiot on The River. The book is a collection of the lessons and photos Henry Winkler gathered while fly fishing in Montana.

He has received a number of accolades from a variety of prestigious organizations, including B'nai B'rith, Peace Prize by the United Nations and Women in Film's Norma Zarky Humanitarian Award. He also received the Chevallier de l'Ordre des Artes et Lettres, the French government's highest honor. In 2011 he was awarded the Honorary Officer of the Most Excellent Order of the British Empire (OBE) from HM the Queen in recognition of his services to children with dyslexia and special education needs.

Henry Winkler travels from Los Angeles where he lives with his wife and two dogs.

Henry Winkler has been labelled the nicest man in Hollywood, and for good reason. He is unfailingly polite, accommodating and seemingly devoid of any showbiz airs and graces.

A world-renowned actor, producer and award-winning author who encourages individuals to achieve their full potential in life, Henry is a charismatic and highly engaging speaker with an exceptional story to tell. From a lifetime in Hollywood, his captivating and inspiring speeches include hilarious anecdotes and real-life stories of his career-highs, to the daily struggles of coping with an undiagnosed severe learning disability.

Hear first-hand how Henry Winkler transformed his own personal dysfunction and unhappy experiences with dyslexia into stories of resilience and hope. The one clear message that stems from all of Henry Winkler’s talks is that every single person in the room has greatness inside them and, more importantly, that everyone is capable of achieving their dreams no matter what difficulties they face.

As a sufferer of dyslexia from early childhood, it wasn’t till he was 31 that Henry was formally diagnosed and had spent most of his life being told by his parents that he was lazy, so naturally Henry began to assume he was actually lazy. He was called stupid and told that he was not living up to his potential. And all the time inside he was thinking, “I don’t think I’m stupid. I don’t want to be stupid. I’m trying as hard as I can. I really am”. He was grounded throughout most of his high school years.

Henry Winkler is an ambassador for education charity Achievement for All, which helps in reading, writing and maths among the country’s most disadvantaged children. He also tours the UK annually with his “My Way!” campaign — in collaboration with children’s newspaper First News — to raise awareness of children who find learning difficult, helping them to get the understanding and support of the adults and other children around them.

Dyslexia
Dyslexia is a neurological problem that manifests itself primarily as a difficulty with written language. Sufferers may also have time management, clumsiness and co-ordination problems. Experts believe the condition, which is thought to affect ten percent of the population, according to the British Dyslexia Association, results from differences in how the brain processes language. It is not an 'intellectual' disability and has been diagnosed in people of all levels of intelligence. Albert Einstein was believed to be a sufferer and could not read until the age of nine; other famous people from Sir Richard Branson to Eddie Izzard and Apple founder the late Steve Jobs have all been diagnosed dyslexics.

Clients often ask about purchasing books for giveaways and delegate packs. Below you’ll find a selection of products by Henry Winkler OBE. Click the images to view on Amazon's website. For bulk orders, please speak with your Booking Agent.

How to book Henry Winkler OBE for your event