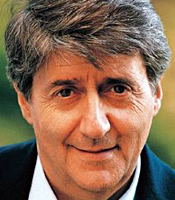 Tom Conti is one of the UK's most accomplished stage, television and film actors. Once described as the 'Thinking Women's Crumpet' he's also won the odd Olivier and Broadway Tony award, in addition to an Oscar nomination.

To the younger generation, Tom was father to Emily (played by Brit actress Helen Baxendale) in hit US sitcom Friends throughout the episodes of her marriage to Ross Geller.

Preferring contemporary over classical theatre (with nary a Shakespeare stage credit in sight), Tom Conti has been one of West End theatre's most enduring and popular faces of the past four decades.

Initially trained for a musical career as a classical pianist but switching gears while attending the Royal Scottish Academy of Music and Drama, his acting career began with the Citizen's Theatre's 1959 production of The Roving Boy at age eighteen.

Throughout the 1960s he tried to make ends meet on the Glasgow and English repertory stages but gained little momentum despite some scattered TV appearances in between. Unable to find the break to sustain himself, he considered leaving the arts at one point for a career in medicine.

While performing in the 1972 play The Black and White Minstrels at the Traverse Theatre for the Edinburgh Festival, he was spotted and cast in the TV series Adam Smith, thus beginning a more promising streak of work. Tom would later return to the play in 1974 at the Hampstead Theatre, where he also performed in Other People and as the title role of Don Juan.

Following a number of successful English mini-series roles, particularly his slothful Charles Bovary in Madame Bovary (1975), Jewish novelist Adam Morris in The Glittering Prizes (1976), and ever-conquesting Norman in The Norman Conquest trilogy by Alan Ayckbourn, Tom reaped huge career rewards under the theatre lights starring as a paralysed sculptor in both the London and Broadway mountings of the right-to-die play Whose Life is it Anyway? in 1979.

Despite losing out on recreating his Whose Life... role on film (Richard Dreyfuss was granted that opportunity in 1981), Tom absolutely wowed American audiences with his scene-stealing work in Merry Christmas Mr. Lawrence (1983) and Reuben, Reuben (1983).

He was given the National Board of Review award for his participation in both films, and earned a "leading actor" Oscar nomination for the latter in which he played an alcoholic Scottish writer.

Tom Conti is a talented and sought-after after dinner speaker who entertains his audiences with anecdotal, colourful and amusing stories about his life and career.

He can also perform 'Jesus, My Boy', a very funny one man show. This intimate, comic performance works as well in a private home as it does on stage.

This is just to say how thrilled we were to have Tom Conti at yesterday’s FDA event.He was the most wonderful guest on stage – full of entertaining anecdotes and generous too in sharing his wise insights. As you’d expect, he held the audience of 100 or so in the palm of his hand. We were very fortunate to have had Tom there, so many thanks for arranging it... please do convey our sincere gratitude to Tom himself for such a terrific evening.

For an hour Tom Conti held an audience utterly spellbound... The reaction was amazing. By turns you could have heard a pin drop and then he had audience was falling about with laughter. What also struck me was how broad Tom's appeal was; both genders, young and old. Acquaintances of mine are still talking about it, three months later. I've seen several well known people in this format, both live and on TV, but Tom Conti is quite simply in a class of his own.

Tom Conti was completely fantastic... a true professional so please do thank him from all of us.

How to book Tom Conti for your event