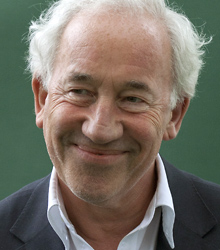 Simon Callow is one of the most revered and respected actors of his generation.

Actor, director and writer, Simon has appeared in many films, including the hugely popular Four Weddings and a Funeral, Shakespeare in Love, Phantom of the Opera, Amadeus and the Hollywood blockbuster Ace Ventura 2: When Nature Calls.

He was born in Streatham, South London, and at the age of nine went to live in Zambia for three years. Simon came back to London aged 12 and attended the London Oratory School. When he left, he worked in the Box Office of Laurence Olivier's National Theatre at the Old Vic, an offer of work which came by return of post following a fan letter to Olivier. It was while watching actors rehearse that Simon Callow realised that acting was something he wanted to do. He went on to study at The Queen's University of Belfast in Northern Ireland before giving up his degree course to train as an actor.

It was his critically acclaimed performance as Mozart in the original stage production of Peter Shaffer's Amadeus at the Royal National Theatre in 1979 that brought Simon to prominence. It also led to his first film role, playing Schikaneder in Miloš Forman's film of the play. Following this, he starred in several series of the Channel 4 sitcom Chance in a Million, as the eccentric Tom Chance, and appeared with Saeed Jaffrey in 1994 British television series Little Napoleons. In the same year, Simon Callow played the much-loved character Gareth in the hit Richard Curtis film Four Weddings and a Funeral.

As a stage actor, Simon has played some of the theatre's most iconic roles. These have ranged from Titus Andronicus, Mozart in Amadeus and Faust to Oscar Wilde in The Importance of Being Oscar, Captain Hook and Pozzo in Waiting For Godot, opposite Sir Ian McKellen, Ronald Pickup and Patrick Stewart.

Simon Callow has also written more than a dozen books. These include Being an Actor, Shooting the Actor, a highly acclaimed biography of Charles Laughton, a biographical trilogy of Orson Welles, Love is Where it Falls and his memoir My Life in Pieces. As both an actor and writer, Simon has come to be greatly associated with the work of Charles Dickens. In addition to playing the writer on stage, film and television, Simon has also performed some of Dickens' theatre pieces: Dr Marigold & Mr Chops, and A Christmas Carol.

Renowned for a series of one-man shows, which have toured the United Kingdom and internationally, these began with a West End production of The Importance of Being Oscar. They have included The Mystery of Charles Dickens by Peter Ackroyd, There Reigns Love, a performance of Shakespeare's sonnets, Dr Marigold & Mr Chops by Charles Dickens, Being Shakespeare, The Man Jesus and most recently Tuesday’s at Tesco’s at 59E59 Theatre in NY.

Everyone at ORT UK was delighted with the contribution made by Simon Callow at our recent Gala Dinner. His after-dinner speech was hugely entertaining and delivered for the organisation exactly what we wanted: to send everyone home with a big smile on their faces. Having attended many Charity fundraisers I cannot recall another occasion when the audience has called out for “more, more” as the speaker was winding up his speech. It was a pleasure and a privilege to have hosted Mr Callow and I would personally be delighted and eager to see him again at another ORT UK event.

Clients often ask about purchasing books for giveaways and delegate packs. Below you’ll find a selection of products by Simon Callow CBE. Click the images to view on Amazon's website. For bulk orders, please speak with your Booking Agent.

How to book Simon Callow CBE for your event