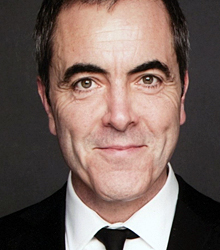 Born and raised in Northern Ireland, Hobbit star James Nesbitt followed the advice of his school teacher and attended drama school in London. Starting his career on stage, Nesbitt has appeared in numerous plays including Paddywack, Translations, As You Like It, Philadelphia Here I Come, and Can't Pay, Won't Pay and most recently Shoot The Crow in the West End.

His first major TV roles included Ballykissangel and Playing The Field but it was playing Adam in the BAFTA award winning Cold Feet that brought him to the attention of a wider audience. Based around the lives of three thirty-something couples, this critically acclaimed drama won James a British Comedy Award in 2000 and a UK National Television Award in 2003.

His range of TV roles since then has included ITV medical drama Monroe, starring alongside Sarah Parish and the title role of Tommy Murphy in Murphy's Law. This was specially written for James by writer Colin Bateman. The first season aired in 2001 and the fifth series aired in 2007.

In 2002, he played the leading role, Ivan Cooper, in the film Bloody Sunday which won him a BAFTA nomination and award for Best Actor at the British Independent Film Awards and the Stockholm Film Festival. The film itself won a Golden Berlin Bear at the Berlin International Film Festival. In 2003 BBC Drama produced a modern re-working of Chaucer's Canterbury Tales with James playing the main lead, Nick, in The Miller's Tale, which aired on BBC America in January 2005.

In early 2004, James played the lead in Passer By - a drama directed by David Morrisey (State of Play) and written by Tony Marchant (Canterbury Tales, Crime & Punishment). In 2007 he starred in the critically acclaimed BBC series Jekyll which gained him a Golden Globe nomination for Best Performance by an Actor in a Mini-Series or Motion Picture made for Television, and a Rose D'Or nomination for Best Actor.

James worked on his first film, Hear My Song in the early 1990s. He then worked extensively with director Michael Winterbottom on the films Jude and Welcome To Sarajevo. He gained wider recognition in the film Waking Ned Devine, playing the loveable pig farmer, Pig Finn. He starred in Danny Boyle's movie Millions and appeared in Woody Allen's Match Point.

In 2008, he played Pontius Pilate in BBC One's The Passion and starred in Midnight Man for ITV1. In 2009, James starred in BBC Films Five Minutes of Heaven and BAFTA award-winning Occupation for BBC One, as well as co-starring with Martin Sheen as an Irish writer who joins a bereaved father undertaking a pilgrimage in Emilio Estevez's The Way.

2010 saw James appear in the TV mini-series The Deep and the film Matching Jack. He has also starred inCoriolanus, alongside Ralph Fiennes and Gerard Butler. He was recently seen as Bofur in The Hobbit trilogy, and starred in the new Channel 4 series Babylon, directed by Danny Boyle and written by Peep Show's Sam Bains and Jesse Armstrong.

In late 2014, he appeared in haunting BBC drama The Missing, where his extraordinary and powerful portrayal of a father looking for his young son has received acclaim from both the public and critics alike.

James Nesbitt has hosted the British Independent Film Awards (BIFA) for the past six years. He has hosted the Irish Film and Television Awards twice, the Go Awards in Belfast in twice, the Travel Trade Gazette Awards, the T3 Awards and the Music Week Awards. He is also an accomplished and in-demand after dinner speaker.

In 2014, Jimmy hosted the GQ Men of the Year Awards – where he took the ice bucket challenge live on stage! – and also the Campaign Media Awards, where he was described as ‘the best awards host I’ve seen in a long time’. Previously in 2014 he’d hosted the Jameson Empire (Film) Awards – where Tom Cruise was amongst other attendees. He sang his self-penned, introductory speech to the tune of That’s Why the Lady is a Tramp… which Empire described as the ‘Best. Opening. Ever’.

James Nesbitt’s after dinner speeches focus around his life and career, giving anecdotal and amusing ‘behind the scenes’ insights into the world of film and TV. He is also very brief-able, and will personalise the content of every speech – whether an after dinner talk, or the introduction to an awards - around the needs of each individual client.

He is comfortable speaking to audiences of all sizes, and is happy to round off a speech with audience Q&A.

James Nesbitt had such live stage presence, from the moment he was introduced the entire audience were in his hands. His introduction speech was pitched exactly at the right level for the guests and their applause to his comments was music to our ears. He might not be a comedian but his shear confidence and natural niceness shone through.

James Nesbitt was a fabulous surprise. He held his audience, and tailored his speech to include aspects of our company business, The standing ovation he received at the end of his speech said it all. Nothing was too much trouble for James later in the evening. James was very patient, warm and photogenic, allowing plenty of time for autographs, pictures and amusing conversation, he especially endeared himself to the ladies with his Irish accent and charm!

The reaction was great for Jimmy, the opener was nice and well pitched - they really were delighted!

Rarely do we work with celebrities who put so much effort, thought and care into hosting our awards- his opening 5 minutes were witty, industry relevant and at times self deprecating and the whole show ran seamlessly and at a great pace.

How to book James Nesbitt for your event