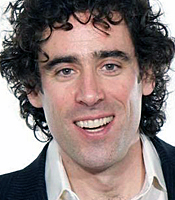 Stephen has also appeared in shows such as “I'm Alan Partridge”, ”The Armando Iannucci Show” and “Dirk Gently”, However, his breakthrough television role was starring as Adrian Mole in “Adrian Mole: The Cappuccino Years” in 2001. In the same year he also appeared in “Sword of Honour” (Channel 4) alongside Daniel Craig and since then has worked extensively in British television as a lead actor.

An acclaimed stage actor, Stephen studied at Cambridge University, where he gained a Master of Arts in Law, and trained at the highly esteemed RADA. He was TONY-nominated for his portrayal of Norman in “The Norman Conquests” on Broadway and starred as Bertie Wooster in “Jeeves and Wooster in Perfect Nonsense” at the Duke of York's Theatre. Stephen has also performed in plays by Shakespeare, Coward, Benn and Goldsmith throughout the UK and the West End.

How to book Stephen Mangan for your event