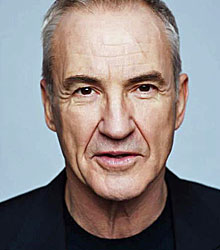 Larry Lamb is best known for playing evil Archie Mitchell in EastEnders but in real life this British actor couldn't be further from his villainous TV role.
He may only have come to attention in recent years with his primetime TV roles on EastEnders and Gavin and Stacey, but 62 year old Larry has been treading the boards since the 1970s on stage and screen.

Larry came to acting late by way of the US oil industry working in Libya and Canada. It was only in his 20s that he discovered a passion for the performing arts when he was studying drama at a university in Nova Scotia.

Larry's TV credits include The New Avengers, Our Friends in the North, Taggart, Spooks and Silent Witness amongst others.

He won over a whole new generation of TV viewers when he played two very different TV roles; the loveable Michael 'Mick' Shipman in Gavin & Stacey and the villainous Archie Mitchell in EastEnders. Archie wreaked havoc in Albert Square; his nasty behaviour including setting fire to The Vic and almost leaving the Mitchell clan financially destitute. He finally got his comeuppance in 2009 when he was bumped off, courtesy of Stacey.

But his role as the Machiavellian East-Ender scooped him the Best Villain award at the British Soap Awards 2010, a role he has since claimed to have based on his own bullying father.

Larry recently revealed he is going deaf in one ear after contracting malaria following a trip to Africa to publicise the plight of deprived Senegalese children (two of which he is currently sponsoring through school). He has two young girls of his own and is the father of TV presenter George Lamb from a previous marriage.

Clients often ask about purchasing books for giveaways and delegate packs. Below you’ll find a selection of products by Larry Lamb. Click the images to view on Amazon's website. For bulk orders, please speak with your Booking Agent.

How to book Larry Lamb for your event