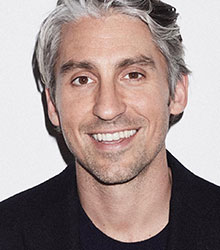 For three years, George presented three successful series of E4’s Big Brother’s Little Brother, finally saying goodbye to a fantastic final series in 2010. George has embarked on a number of exciting projects since, from hosting BBC3’s BAFTA Red Carpet coverage to being the first on set after the live anniversary episode of 'Eastenders Live: The Aftermath’ for BBC3. He has also hosted the hugely popular BBC3 format 'Young Talent of the Year'. In 2012 he hosted three series of Channel 4's live week-long game show 'The Bank Job'.

From 2008 to 2010 George’s BBC6 Music radio show was the perfect accompaniment to your day. Featuring hilarious banter with co-host Marc Hughes and an eclectic playlist,on Monday–Friday’s 10am–1pm, it proved why he was awarded the prestigious Sony Rising Star Award 2008 as voted for by the public.

Through George’s work on Channel 4 and E4 Music, he’s been fortunate enough to interview some of the biggest names in music and film. Prior to his current career George was an accomplished band manager responsible for the careers of dance music maestros the Audio Bully’s and current solo sensation, Lilly Allen.

George enjoys working with his Dad - actor & television star Larry Lamb. In 2009 they collaborated on ITV2's 'The Parent Trip' on a journey to Namibia, and more recently he embarked on a cycling challenge with him for Channel 5, called 'Britain by Bike'. He's also thrilled to be working with BBC3 & Channel 5 within factual and exploring issues affecting young people.

George is a sustainability campaigner and in 2019 founded GROW, a community farm and life skills initiative. The projects aim is to connect young people with nature and arm them with tools to manage their mental and physical well-being through activities like farming and meditation.

I just wanted to pass on our HUGE thank you to George for Saturday. It was an absolutely fantastic day and we would not have been able to do it with George, so we are very grateful for this.

How to book George Lamb for your event