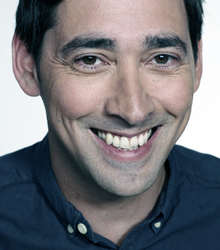 Colin was thrilled to join talkSPORT, hosting their weekly mid-morning show. Each day Colin is joined by an array of guests from the world of sport and discusses the big news and debates of the day. Listen in weekdays from 10am-1pm.

Colin previously hosted the sporting institution that is Fighting Talk on BBC Radio 5 Live and fronted their Friday evening sports preview show, Kicking Off with Colin Murray. Last year he presented a six-part series on BBC Radio 6 Music which took listeners on an audio journey through a soundscape of music, film, history and comedy. He also reunited with his Radio One co-host Edith Bowman to present Radio 5 Live's ‘Bump Club', following women through their pregnancy, offering tips and guidance whilst tying in with the birth of the new Royal baby.

He was the anchor of the BBC's Match of the Day 2, the Sunday night version of the most famous football highlights show on earth.

During this period, he became the IPR Northern Ireland Entertainment Journalist of the Year for his work with the Irish Sunday People.

Keen to keep writing, he recently achieved a lifelong ambition by becoming a published author, writing A Random History of Football for Orion Publishing, which has been reprinted since.

He also writes weekly columns for the Metro newspaper and Radio Times.
His dream is to one day host Countdown and he has been lucky enough to be in dictionary corner three times.

Colin was excellent. The crowd LOVED him! I have never received such good feedback from guests about a host. He was so professional and really took an interest in what he was presenting which really impressed the Incisive Team. Please pass on my feedback to him and thank him for making the awards such a success.

I just wanted to pass on my thanks to Colin for his appearance at the Farnham Park opening; he was fantastic and the GB Lions whom I coach felt like they'd made the big time thanks to the way he introduced them to the crowd before the game. The Farnham opening will be a great memory for us all, in no small part thanks to Colin.

Clients often ask about purchasing books for giveaways and delegate packs. Below you’ll find a selection of products by Colin Murray. Click the images to view on Amazon's website. For bulk orders, please speak with your Booking Agent.

How to book Colin Murray for your event