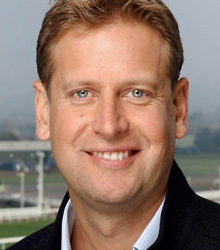 A former odds compiler for Ladbrokes and journalist at Sports Adviser Magazine, Ed Chamberlin first appeared on Sky Sports in 1999 as the resident bookie stats expert alongside Matthew Lorenzo and Kirsty Gallagher. From there he went on to co-host the betting show ‘The Full SP' with Jeff Stelling before joining the Sky Sports News team on a full-time basis.

Between 2010 and 2017 Ed was the face of the Premier League on Sky Sports, presenting their flagship shows Super Sunday and Monday Night Football, alongside Gary Neville and Jamie Carragher.

Ed has hosted World Cup and Champions League draws and the lively summer show Sports Saturday - and was one of the Sky Sports presenters based out in South Africa for the 2010 World Cup. He has also presented rugby union, both domestic and international, and athletics on Sky Sports as well as shows like Football First and Goals on Sunday.

On 1st January 2017, after an absence of more than 30 years, ITV took over from Channel 4 as the home of British racing television coverage. Since then Ed has fronted all the key races and festivals in the UK, including Cheltenham, 1000 and 2000 Guineas, The Oaks and Derby, Glorious Goodwood, St Leger, Champions Day, Prix de l’Arc de Triomphe and he became the 8th broadcaster to present the Grand National on terrestrial television.

Away from television, Ed Chamberlin equally at home hosting corporate events such as awards ceremonies, breakfast meetings, Q&A Panels and gala charity dinners. Ed's all round experience as a TV Presenter and corporate event host allows him to really add value to any occasion with his reassuring and professional manner that immediately puts a viewer or audience member at ease.

How to book Ed Chamberlin for your event