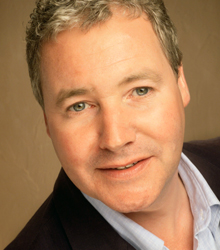 Having started out in news and current affairs at the BBC, he is currently a presenter on Sky News and Sports and is the link/anchor for BBC Grandstand's highly successful interactive television coverage of major sporting events such as the Olympic and Commonwealth Games, Wimbledon Tennis, Open Golf, and Six Nations Rugby.

Having previously presented for BBC South News and Out & About, Rob is best known to national TV audiences as the quiz-master for BBC 1's successful daytime show Turnabout and as one of the regular presenters on major outside broadcasts, including the BBC's (Bafta Award winning) programmes marking the 50th anniversary of the end of the Second World War - inc. V.E & V.J Day. He also joined the team which gave live commentary on the opening of the Channel Tunnel leading us to... trains and boats and planes! Rob introduced a week-long live look at British Rail for Railwatch - Boats were tackled presenting The International Boat Show... and planes were covered with The International Air Tattoo, Farnborough and International Aerospace for BBC & ITV.

Rob has reported from a wide variety of locations for news - but also presented the film based documentary series The Geography Programme.

Away from broadcast television, Rob Curling anchors training programmes for the financial, legal and business professionals as well as for the aviation and aerospace industry. He is in demand as an after-dinner speaker and conference host for a wide range of clients and runs media training sessions both in the UK and abroad.

How to book Rob Curling for your event