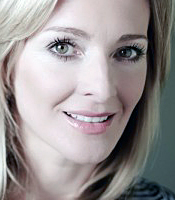 Gabby Logan has established herself as one of the most talented sports journalists and television presenters in the UK. With notable achievements including being the first woman to present a live terrestrial football match, presenting both the football and rugby World Cups for ITV, winning three TRIC awards and being the first ever host of the televised BAFTA Craft Awards for the Millennium.

A former international gymnast, Gabby began her broadcasting career in radio in 1992 and joined Sky Sports in 1996 where she quickly established herself as one of their key presenters. She joined ITV in 1998 and during her time at the channel Gabby’s repertoire expanded through presenting various fixtures including The World Cup and Champions League.

In 2004, she hosted Sport Relief for the BBC before joining the corporation in 2007. While at the BBC Gabby has presented the Final Score, Inside Sport, Invictus Games, MOTD Six Nations, The Olympic Journey, The One Show, Inspire: The Premier League Show, The World Swimming Championships and Women’s Football, making her one of the network’s most integral faces. She was also a key member of the BBC’s presenting team for the 2012 and 2016 Olympic Games, 2014 Brazil World Cup and the 2014 Glasgow Commonwealth Games.

Following various stints on the station Gabby began presenting a weekly Sunday morning show on 5Live in 2008 and until 2011 presented the Gabby Logan show during weekdays. She also hosted a live daily show Live with Gabby on Channel 5.

In 2013, she presented I Love My Country, a prime time patriotic quiz show for BBC1 along with the celebrity diving show Splash! on ITV with Vernon Kay and Tom Daley. That year also saw her presenting Sport Relief from the Olympic Park as well as hosting the BBC’s first ever Sports Prom. In 2015, she hosted the prime time entertainment show Flockstars for ITV.

A prolific writer, Gabby Logan’s been a columnist for The Times and has previously written for The Independent, The Guardian, Glamour and Stylist Magazine. Currently a patron of the Disabilities Trust, Prince’s Trust and Great Ormond Street, Gabby is also a vice president of Sparks.

She was awarded a MBE for services to broadcasting and promoting women in sport in the New Year Honours List 2020.

In between Gabby Logan's broadcast work and writing her column for The Times, she is much in demand for hosting award ceremonies, motivational speaking engagements and personal appearances.

How did Gabby make the transition from a Commonwealth Games Rythmic Gymnast to principal football presenter? Just how difficult was it making her way up the broadcast ladder as a woman in a man's world?

In her presentations, Gabby talks of her experiences from a lifetime spent in a male-dominated sporting arena; the motivation needed to reach the top of her chosen profession and then to stay there; the teamwork required to be able to present a programme such as the Champions League Final and the leadership skills she uses to make everything run smoothly in front of the cameras.

She has a law degree from Durham University, a wonderful gift of seeing the funny side of life and has a fund of behind the scenes anecdotes from both football and rugby, particularly from the Rugby World Cup, which she presented from Australia in 2003.

Gabby Logan has been professionally trained in speaking by Straight Talking and fully appreciates the links between success in sport and success in business. She is available for motivational and after dinner speaking, hosting & facilitating conferences and hosting awards ceremonies.

How to book Gabby Logan MBE for your event