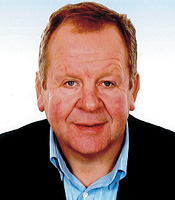 Perhaps the best-known and most popular rugby player of recent times, Bill played for England 34 times between 1975 and 1982 when injury brought his career to a premature halt.

For 21 of those games Bill was an inspirational captain, and English fans of the right age will never forget that great climax in March 1980 when England beat Scotland to secure the Grand Slam, following that memorable thrashing of Wales at Twickenham, England 9 Wales 8!!! (The Erica Rowe intervention will also be a fond memory for some sad fans!!) Little did the Fylde sixth team in 1970 realise what heights their new fullback would reach, 7 Lions caps, 3 in New Zealand 1977, and 4 as captain in South Africa 1980.

Bill is of course a veteran of A Question of Sport, and heavily involved at Twickenham in the development of our game. An experienced, and popular speaker for all occasions.

In 2019 Bill Beaumont was awarded a knighthood in the New Year’s Honours list.

How to book Sir Bill Beaumont OBE for your event