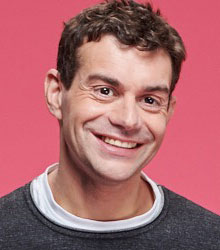 Vassos Alexander is one of the best-known sports broadcasters in the country. Every morning he's heard by millions of people as an integral part of the Chris Evans Breakfast show on Virgin. He is also a presenter, author and endurance runner and is often heard commentating on BBC Radio and Television.

Vassos has covered almost every sporting event you can think of - from the Olympics to The Ashes, Wimbledon to Wentworth, the World Cup to the World Darts. He's also a keen runner who's completed several 3-hour marathons, as well as an Ironman triathlon (2.4m swim, 112m bike, 26.2m run).

In March 2016, his book Don't Stop Me Now was published by Bloomsbury books, charting his rise from couch potato to accomplished marathon runner. Part escapee, part self-discovery, part therapy and part fitness, the book is a funny and inspiring book for anyone with a pair of well-worn trainers by the door... or thinking of buying a pair.

Vassos Alexander is always delighted to appear as an after dinner speaker at corporate, industry and association dinners, talking about experiences from his extensive career, behind the scenes from great sporting events and the inside story on sports broadcasting.

He is also a confident, entertaining and very experienced live event host and interviewer.

How to book Vassos Alexander for your event