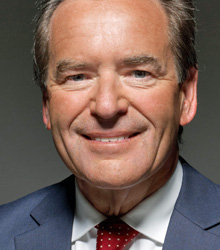 Jeff Stelling is best known as the host of Soccer Saturday and Monday Night Football on Sky Sports, having worked at the network for over 30 years. He also presented Channel 4 daytime quiz show Countdown from 2009–2011 and ITV’s Alphabetical in 2016 and 2017.

He has been named Sports Broadcaster of the Year for four successive years by the Sports Journalists' Association, based on a poll of its members.

Jeff was raised in the North-East town of Hartlepool, and an avid supporter of local Football League team Hartlepool United. After an apprenticeship on the local newspaper his first broadcasting position was as a reporter on Middlesbrough F.C. on Radio Tees before moving to BBC Radio 2's weekend sports programme Sport On 2, covering the Los Angeles and Seoul Olympic games.

He later spent time as a sports newsreader at TV-am, Channel 4, Eurosport and British Satellite Broadcasting before moving to Sky in 1992 to present coverage of horse racing, snooker and darts.

In 1994, Jeff became presenter of SKY Sports’ Soccer Saturday, renamed as Gillette Soccer Saturday in 1998, hosting a programme lasting up to six hours of football discussion and live reports on the afternoon's games with a panel of pundits including George Best, Frank McLintock, Chris Kamara and Rodney Marsh, the former England striker whose argumentative nature led to entertaining viewing until his dismissal from Sky Sports.

Much of the programme's popularity is put down to Jeff, The Guardian praising him for “exceptional professionalism” and When Saturday Comes describing him as “perhaps the best sports presenter on British TV”.

Jeff Stelling rarely appears on terrestrial television, despite known offers to become the face of ITV Sport, although he won a sports presenter special edition of The Weakest Link.

He has also made numerous cameo TV appearances, starring as himself in a number of episodes of the football comedy TV series Ted Lasso, plus The IT Crowd, Dream Team and Mike Bassett: Manager. In 2013, he appeared in an advert for Sky Broadband which spoofed a previous Sky Broadband advert featuring Bruce Willis.

Jeff Stelling was fantastic, went down a storm and was a thoroughly nice gentleman too !!!!

Clients often ask about purchasing books for giveaways and delegate packs. Below you’ll find a selection of products by Jeff Stelling. Click the images to view on Amazon's website. For bulk orders, please speak with your Booking Agent.

How to book Jeff Stelling for your event