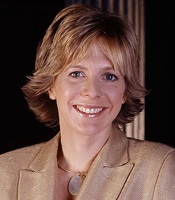 Hazel Irvine is one Britain’s most experienced, versatile and recognised presenters. The face of BBC Sport’s coverage of golf including The Open and The Masters, snooker and major events coverage, she is a previous recipient of the Royal Television Society’s Sports Presenter of the Year.

Born in St Andrews, Scotland, Hazel attended the Hermitage Academy in Helensburgh before studying for an MA in History of Art at the University of St Andrews. At the age of 27, she was the youngest person to present Grandstand. A talented sportswoman, Irvine gained representative honours in golf, netball and athletics for Scottish Universities.

Hazel Irvine's broadcasting career began in 1986 as a production assistant with Radio Clyde in Glasgow. Her move into sport came a year later when she joined Scottish Television as a reporter. She then joined BBC Scotland in 1990 as presenter of its Friday night sports preview programme Sportscene. She went on to work as part of the BBC's award winning team covering the Barcelona Olympics, and in the same year reported in Sweden on the European Football Championships. Later that year she joined BBC Sport in London.

An excellent and sought-after conference and awards host, Hazel Irvine equally at home as an entertaining after-dinner speaker.

Hazel Irvine conducted outstanding interviews with Lord Coe and James Cracknell during exclusive private dinners at Claridge's and the Savoy for Cisco and the Telegraph Media Group. She was absolutely outstanding in every way and will be asked to host all our forthcoming Cisco-Telegraph Olympic themed dinners.

I can’t praise Hazel highly enough for her charming, focused and highly professional approach; supporting and motivating everyone on stage and also behind the scenes... I doubt that the events would have been so engaging and enjoyable without her commitment and support. Entertaining and training 15,000 people over a two day period was no mean feat – and her presenting talents, phenomenal sporting knowledge and passion for the volunteers and the Games played such a massive part in our success. She was an absolute pleasure to deal with and I hope we get to work with her again soon.

You made it all look easy. Not only did you deliver the show as written, you tweaked, embellished, personalised and generally improved every part of the script and threw yourself into the spirit of things... Your chemistry with our various guests and most importantly the audience, was great to see, and I know from our backstage chats you kept trying to make the show better, despite a tiring schedule.

How to book Hazel Irvine for your event