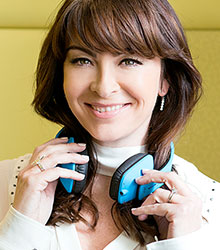 Away from sport and renowned for her love of technology, Suzi was the presenter of Channel 5's hugely popular and successful The Gadget Show for 8 years covering 17 series and during this time, she presented the live version of the Gadget Show at the NEC where the show was performed over a 5 day period to over 75,000 guests. Her in-depth knowledge also made her the technology ambassador for The Ideal Home Show for the last 5 years.

Suzi's numerous TV credits include, How to Take Stunning Pictures for Channel 5, four series of House Call for BBC One, four series of City Hospital for BBC One, Treasure Hunt on BBC Two and for its international channel, What's the big idea for Discovery, Co- hosted Superstars with Johnny Vaughn for BBC One, The Ball's In Our Court for UKTV, Watchdog Health Check for BBC One, On The Spot lottery show for BBC One and Operation Homefront for Channel 5. She has appeared as a guest on many shows; Question of Sport, Saturday Kitchen, They Think it's all Over, Sarah Millican, Never mind the Buzzcocks, Eggheads to name a few and has hosted features on This Morning, The Alan Titchmarsh Show and Daybreak.

Suzi also enjoys her work as a journalist, contributing over the years to many newspapers, magazines and websites; The Telegraph, The Times, Motorcycle News, T3, Stuff magazine, MSN.

Being an in demand corporate host, she is often called upon to present events for companies such as HSBC, BT, DELL, Suzuki, Fiat, 2014 Yamaha motorbike conference, Zoom Auction for F1, Phillips, EE, O2, Nikon, Honda, Mercedes, Royal Mail and Honda.

Apart from sport and technology, Suzi loves travel, music, cooking and natural history. She has an honorary degree with Wolverhampton University and supports many charities including, but not limited to Promise Dreams, Marie Curie, UK Youth and Burn Aid.

With her technology expertise and media experience, Suzi was the perfect choice to front the Philips Saeco 'Moments to Savour' campaign. She understood the needs of the brand and delivered messaging perfectly. Suzi was very popular with broadcast journalists and was a true professional when filming the Saeco 'Gadget Wish List' web film. An absolute pleasure to work with!

How to book Suzi Perry for your event