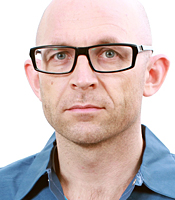 When it comes to gadgets, science and all things tech, Jason is a force of nature. His own inventions, which include the world's first working jet-powered hoverboard, have become legendary with viewers of The Gadget Show. He is also a private pilot and is licensed by the Home Office to build transmitters.

With a passion for technology and science that is utterly infectious, Jason brings confidence to his performance on camera rarely seen in factual television. He also boasts excellent comic abilities, developed during his years a performing in a double act with Little Britain star David Walliams. Before they explored London's stand-up clubs, Jason and David formed their own comedy club with fellow performers Myfanwy Moore (producer of Little Britain) and Simon Pegg (Star Trek, Shaun of the Dead, James Bond).

Jason Bradbury is an avid collector of exotic tech. His prize possessions include a mint-condition Sinclair C5 and his current favourite gadget, the Easy Glider - a skateboard-towing electric drive wheel. He owns several robots, including dancing bi-pedal, UAVs that fly and an Automower. A complete adrenaline junkie, Jason is a six-time world record holder. His records include the world's fastest jet-powered luge, world's fastest water powered car and world's longest jump with an RC car.

An accomplished writer, Jason Bradbury has written several books with publisher Puffin. His Dot Robot series follows a twelve-year-old boy genius that invents a robot crime-fighting force. The science in the books is real and most of it has been witnessed by Jason firsthand. He often tours schools and festivals with the 'Dot Robot Roadshow', giving people the opportunity to see some of the science in action.

He is on the judging panels for the BAFTA Video Game Awards and the Media Guardian Innovation Awards.

Clients often ask about purchasing books for giveaways and delegate packs. Below you’ll find a selection of products by Jason Bradbury. Click the images to view on Amazon's website. For bulk orders, please speak with your Booking Agent.

How to book Jason Bradbury for your event