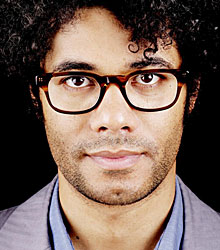 He is probably best known for his role in the Channel 4 sitcom The IT Crowd, for which he won the 2014 BAFTA for Best Male Comedy Performance, and for his role in Garth Marenghi’s Dark place, which he also co-created and directed. This was followed with a sequel series Man to Man with Dean Lerner which Richard directed and co-wrote and was broadcast on prime time Channel 4.

However, he has also directed feature films –notably Submarine(2010) and The Double (2013) starring Jesse Eisenberg – as well as making music videos for bands such as Arctic Monkeys, Yeah Yeah Yeahs, Super Fury Animals, Vampire Weekend and Kasabian. He also directed the feature-length concert film of the Arctic Monkeys at the Apollo which was released in 2008.

Richard has also starred in comedy hits such as The Mighty Boosh, Nathan Barley and Noel Fielding’s Luxury Comedy. He often appears on comedy panel shows, including The Big Fat Quiz and 8 Out f 10 Cats Does Countdown, and was team captain on Was It Something I Said?.

The son of a Norwegian mother and Nigerian father, Richard Ayoade was born in London but grew up in Suffolk. He studied law at Cambridge University where he became the president of the Cambridge Footlights club.

He currently presents Travel Man and The Crystal Maze for Channel 4 and has released two books, Ayoade on Ayoade (2014) and The Grip of Film (2017) both published by Faber & Faber.

The event was a success, no small part thanks to Richard Ayoade who we think definitely over delivered on what we were expecting!

Clients often ask about purchasing books for giveaways and delegate packs. Below you’ll find a selection of products by Richard Ayoade. Click the images to view on Amazon's website. For bulk orders, please speak with your Booking Agent.

How to book Richard Ayoade for your event