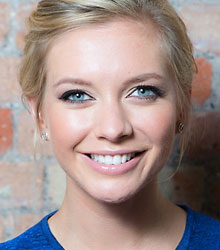 Rachel Riley is the numbers expert on Channel 4's long-running quiz show Countdown, having taken over the helm from Carol Vorderman in January 2009.

In February 2010 Rachel appeared in the Channel 4 Dispatches programme Kids Don't Count. The two-part documentary asked how and why we are failing Britain's children when it comes to maths. Rachel visited a primary school in Bristol to help encourage the children to tackle their maths demons.

Rachel has also been invited by Channel 4 to chair a debate regarding maths in schools, which linked to the Dispatches documentary Kid's Don't Count. She chaired a panel of three experts, including J Sainsbury's CEO, Justin King.

In July 2010 Rachel appeared in a cameo role in Channel 4's series The IT Crowd entitled 'The Final Countdown' (Series 4 Episode 2).

Brought up in Thorpe Bay, Essex, Rachel Riley graduated from Oriel College Oxford with an upper second-class honours degree in Mathematics, covering Quantum Theory, Fluid Mechanics and Applied Maths and was made a scholar in 2006. She captained the Oriel College Netball team and played in the women's football team.

After graduating Rachel began work as a data analyst for a website company in London. She was encouraged to apply for the Countdown position by her mother, and didn't have any ambition to be a television presenter, but decided to apply because she was interested in the numbers part of the game. Rachel was chosen from more than a thousand applicants despite having no previous television experience.

In 2009, Rachel was recruited by the Post Office, employing her mathematical skills to help advise holidaymakers on how to make the most of their holiday currency, after a report by the Post Office revealed that a significant number of holidaymakers fail to calculate the actual cost of goods and services when travelling abroad and often overspend their holiday budget.

Available for a variety of live corporate work, from awards hosting to conference facilitating, Rachel Riley's previous engagements have included being a panellist on the Internet Explorer 8 Life Academy Competition 2010, guest presenting an award at the Police Bravery Awards 2010, facilitating the Channel 4 Platform ‘Maths in Schools' Debate linked to the Dispatches programme Kids Don't Count, and being a celebrity guest for the Jersey Hospice Care Million Pound Lottery in Jersey.

In addition to corporate appearances, Rachel Riley has a keen interest in promoting Maths and Science to young people. She makes frequent school visits and has been involved in a number of initiatives such as Enterprise UK's Make Your Mark Challenge and the Science: [So what? So everything] campaign.

Rachel Riley was fantastic. She was incredibly professional, enthusiastic and really engaged with the finalists and other judges. Brilliant asset to our day!

We found Rachel Riley to be extremely professional and acted as a great facilitator to the event, with a keen knowledge and enthusiasm. She chaired the debate intelligently and acted well under pressure in what was a lively and informative evening.

How to book Rachel Riley for your event