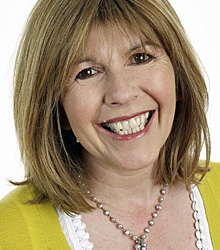 The broadcasting career of Maggie Philbin started with a four year stint co-presenting BBC's legendary Saturday morning children's show Multicoloured Swap Shop, which she joined fresh from Manchester University where she had studied English and Drama.

A major turning point in Maggie’s career, for which she is always remembered, came with her subsequent move to the BBC's flagship science and technology programme Tomorrow's World, where she remained one of the key presenters for eight years — many of the everyday innovations we now take for granted were demonstrated on live television for the very first time by Maggie — the first truly mobile phone, voice recognition, the first car navigation system, the first example of virtual reality, the first fax machine, even the first supermarket barcode reader.

Since those days Maggie has worked on science, medical and technology programmes for over 30 years. Her television career encompasses Hospital Watch, Bang Goes The Theory, Bodymatters Roadshow, QED, and BBC2's women's documentary series The Doll's House. She has worked as a medical and consumer reporter for This Morning on ITV and has presented film reports for BBC's current affairs programme 4x4, as well as a series called Heartland for Channel Health. She has also presented the science programme Wideworld for Channel 5.

Maggie Philbin is President of the Institute of Engineering Designers and co-founder and CEO of TeenTech an award winning organisation helping young people, their parents and teachers understand more about the real opportunities in Science, Technology and Engineering.

Then in 2016 Maggie was named as the Most Influential Woman in UKIT by Computer Weekly Magazine and was also named as 2016 Digital Leader of the Year for her work with TeenTech. She was awarded an OBE in Jan 2017 for promoting careers in STEM and the Creative Industries. Maggie is Patron of the Council of Professors and Heads of Computing and former President (2014-18) of the Institute of Engineering Designers.

Many people at the top of their professions today grew up with Maggie Philbin as part of their lives, and view her with great affection and recognise the humour, intelligence and skills she can bring to just about any event.

Such longevity on television, over several decades, has made Maggie Philbin hugely popular and sought-after in the corporate sector where her diverse range of broadcasting skills is a valuable asset for conferences, business presentations and corporate television.

Keynote & Business Speaker
Maggie Philbin talks with humour, authority and gravitas about the key ingredients of innovation and forward thinking in business. As a keynote speaker, what Maggie offers is essentially a punchy 25-45 min presentation, using archive clips and her unique experience of some of the greatest inventors and innovators of all time.

Audiences appreciate the relevance of the information, which is always carefully researched. Maggie has an obvious interest in technology, so it goes down well with the tech sector, but there is a very strong business message which works for general audiences too. She is passionate both about technology and the need for more female entrepreneurs.

Maggie has a unique resonance with audiences who not only watch her now on TV but also grew up with her on the legendary Saturday morning children's show Multi-Coloured Swap Shop and Tomorrow’s World.

She is well known for her involvement in the promotion of STEM subjects and women in business, science and technology.

How to book Maggie Philbin OBE for your event