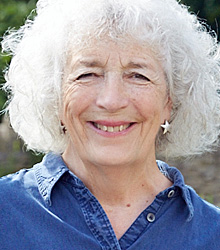 Judith Hann is one of Britain's leading science journalists, broadcasters and writers. Known to millions throughout the UK, she was the longest serving presenter of BBC1's popular science programme Tomorrow's World, for 20 years between 1974 - 1994, which was seen weekly by up to 12 million viewers.

Judith has also written and presented programmes and series of her own for TV and radio on healthy food, the science of ageing, renewable energy, the environment, business matters and the scientific background to personality types. She has considerable medical knowledge after presenting most of Tomorrow's World medical items, as well as fronting the BBC1 programme Watchdog Healthcheck.

Educated at Parkfields Cedars Grammar School, a state girls school in Derby, Judith Hann attended the University of Durham, from which she graduated with a BSc degree in zoology with Botany. She trained as a newspaper journalist and twice won the Glaxo Award for Science Writing.

For five years she was a member of the AEBC, the Biotechnology Commission, helping to write reports, organise debates and give advice to the Government on new areas of scientific development, including GM crops, which could affect farming and the environment.

Judith has always carried on her writing career alongside broadcasting work and has written seven books to-date including her new book HERBS, plus several books on science, medicine, health and food, and How Science Works, which has been translated into twenty languages and has sold over one million copies worldwide.

Judith is a self-confessed herb fanatic and has planted a garden with over 150 different types of edible herbs at her home in the Cotswolds. She was President of the Herb Society and cooked for Rick Stein on his Food Heroes series. She has made other TV programmes on food as well as writing two books on the subject.

Durham University awarded Judith Hann an Honorary Doctorate of Civil Law for what the citation described as her “outstanding contribution to science journalism”.

Judith Hann regularly gives talks and lectures and has linked roadshows on energy efficiency and waste recycling for government departments. She also chairs major conferences within the UK, for the EU and many large companies and organisations around the world.

Judith Hann was very well received by the audience, and on a personal level it was great to work with her throughout the day. She was lovely!

Clients often ask about purchasing books for giveaways and delegate packs. Below you’ll find a selection of products by Judith Hann. Click the images to view on Amazon's website. For bulk orders, please speak with your Booking Agent.

How to book Judith Hann for your event