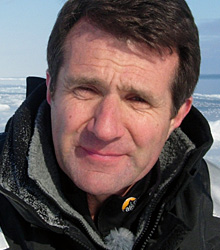 As one of the BBC's leading correspondents, David Shukman is acclaimed for his innovative reporting of environmental issues from the front lines of global change.

David graduated in Geography from Durham University and, after a spell on the Coventry Evening Telegraph, since 1983 he has gone on to hold a series of key positions in the BBC reporting on conflicts, politics, research and environment.

For two years David covered The Troubles in Northern Ireland (1985-87) before being appointed Defence Correspondent (1987-95), which took him to Berlin for the fall of the Wall, the Gulf, and some of the former Soviet Union's most secret nuclear installations.

As Europe Correspondent based in Brussels (1995-99), David covered the tensions between the UK and the EU, before being appointed World Affairs Correspondent between 1999 and 2003, prior to taking up his current position. As the BBC's Science and Environment correspondent, he has reported from more than 80 countries and has pioneered the use of the latest technologies to become the first to broadcast live from a wide range of locations - including the heart of the rain forest in Brazil and the tiny Pacific island of Tuvalu which may be the first nation to be abandoned because of global warming.

David Shukman's brief covers climate change, space exploration, environmental disasters, avian flu and future technologies. Previous assignments have included reporting on the fall of the Berlin Wall from the eastern side and being the first Western reporter to gain access to a Soviet nuclear base. He has covered conflicts including Bosnia, Angola and East Timor.

More recently, in his current role, David spent four days on a Norwegian whaling ship to provide a firsthand account of the highly controversial practice of hunting whales. He also got rather too close to the elephants of the Kruger National Park in South Africa in his coverage of the plans for a cull.

In his keynote and after dinner presentations, David Shukman guides the corporate world through the challenging environmental issues facing business today and enables them to make positive changes to the way they operate in order to enhance economic and environmental effectiveness.

David has won awards for transforming coverage from remote locations as diverse as the Arctic, the Antarctic and the Amazon and built up a wealth of insights and experience, from being the first reporter to walk on a new 'ice island' near the North Pole to becoming one of the first journalists to journey through the fabled North West Passage.

David Shukman presents clear explanations of the latest science with a vivid anecdotal style. As the BBC’s on-screen climate specialist during the Live Earth concerts, and a regular public speaker and conference chair, he’s hugely experienced and really enjoys connecting with an audience.

You were terrific, just the right approachable tone, great VTs and a convincingly independent view of the issue.

On behalf of the BPI board of management and our membership can I thank David Shukman for speaking so eloquently and passionately about the issues our industry face when it comes to the environment. It was exactly the right tone and pitched at a level so that the general message was impactful as well as making sure they felt empowered to start thinking about changing their business model or personal approach.

David Shukman did an excellent job of mediating the debate, making sure all voices were heard, drawing out information and ensuring that it achieved the client’s objectives.

Clients often ask about purchasing books for giveaways and delegate packs. Below you’ll find a selection of products by David Shukman. Click the images to view on Amazon's website. For bulk orders, please speak with your Booking Agent.

How to book David Shukman for your event