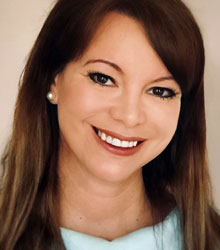 Elizabeth Rizzini is a Met Office trained BBC weather presenter and presents the weather across all platforms — regional, national and international — including high profile programmes such as the 6 o’clock News, 5 live Breakfast, Radio 4’s PM and BBC World. She can currently be seen regularly on BBC Breakfast with the regional forecasts.

She also has an interest in space weather and tennis and has presented forecasts for the Sky at Night and Wimbledon where she regularly broadcasts from the tournament. She has also appeared on C4’s Gogglebox, Newsround, the Antiques Roadshow and Curious Films’ Being Frank, about her partner, BBC security correspondent Frank Gardner.

She has lived and studied in both France and Spain and was based in Madrid for a number of years before returning to take a Masters degree in which she tackled the subject of environmental journalism and climate change.

After gaining her degree (with Merit) she went on to train in meteorology with the Met Office and has worked for the last ten years as a weather presenter for the BBC. Her first outing in broadcast meteorology was compiling and presenting a bilingual jellyfish report for Spanish coastal resorts. Elizabeth is fluent in both Spanish and Italian.

Elizabeth ran the London marathon in 2016 for Medicins Sans Frontiers and is an ambassador for the Cats Protection League. There is a gritter in Ipswich named after her – the Lizzie Grittzini.

Elizabeth Rizzini is an accomplished live presenter and conference moderator. She has hosted award ceremonies for the Duke of Edinburgh’s award in particular as well as other events and has acted as judge for charity fundraising competitions.

How to book Elizabeth Rizzini for your event