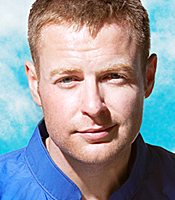 Tomasz Schafernaker is a familiar face to BBC viewers as one of the broadcaster's flagship weather presenters and meteorologists.

He was born in Gdańsk, Poland in 1979 and has lived in both the UK and Poland throughout his life. Tomasz graduated from Reading University in 2000 with a BSc in Meteorology. Further studies and training continued at the Met Office College in Exeter and at RAF Lyneham before gaining the post of Weather Presenter for the BBC.

Tomasz first presented the weather on National BBC Television from 2006 with earlier appearances on regional TV around the UK. His first weather bulletin was broadcast from BBC Southeast Today in Tunbridge Wells in 2001. He has also appeared on various other TV shows including Tonights The Night for John Barrowman and BBC's The One Show.

Tomasz hs also been the regular 'weather expert' for the Chris Evans Show and the Simon Mayo Show on Radio 2. Aside from his passion in Meteorology and climate Tomasz is a skilled artist and enjoys keeping fit. In the past couple of years he has enjoyed long-distance cycling and has participated in various charity rides including London to Brighton and London to Paris.

Tomasz Schafernaker is a hugely popular presenter with a large fan base, in 2010 he was presented with the TRIC award for Best Weather Presenter. During 2011, Tomasz was one of the featured presenters for The Great British Weather over the summer on BBC1.

In 2012, Tomasz launched a new digital online station as Weather Editor as well as undertaking several freelance projects for the National Geographic, Channel Four and the Discovery Channel.

Tomasz Schafernaker is currently forecasting for the BBC and continues to work on numerous freelance projects which include a children's weather book.

How to book Tomasz Schafernaker for your event

To book Tomasz Schafernaker, please submit an online enquiry, email bookings@nmp.co.uk or speak with one of our booking agents on +44 (0)1372 361 004.