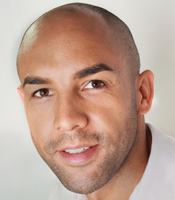 Whilst at University Alex Beresford had his first taste of presenting on a programme called Curriculum Bites on BBC2 - a spin-off of BBC Bite Size. The series was aimed at students studying for GCSE's and is currently still used in schools today.

It wasn't long after finishing his degree in English Studies and Performance Art Alex joined ITV as an autocue operator but then the opportunity arose to present the weather on weekends, which he trained for, and it wasn't long before he was appearing on the main news programme as the weather forecast presenter on ITV Bristol every weekday at 6pm.

Soon after, Alex Beresford joined the network team presenting the national forecast on the main channel, ITV. Since taking on the bigger role, Alex has appeared a number of times on ITV's This Morning covering headline stories such as ‘Frozen Britain' to the more light hearted task of reviewing camping tents with TV personality Louie Spence.

Alex can also be seen presenting the early morning weather on ITV's flagship breakfast programme Good Morning Britain, often out and about on location during the summer.

In 2013, Alex presented his first documentary series on Channel 4 called World's Weirdest Weather; it was a 3-part series looking at strange weather phenomena from fiercely dangerous Firenadoes to beautifully formed frost flowers. The series pulled in on average 1.5 million per episode.

Later that sae year, an F5 Tornado touched down in Oklahoma tearing a 17-mile path of destruction through the city of Moore, killing 25 people and made headline news across the world. Alex was flown out to the devastated area just a couple of days later to make a special one-hour programme called Super Tornado which aired on Channel 4. Whilst there he looked at the science behind the violent twister and met the Oklahomans who'd lost everything. An experience he will never forget.

Alex Beresford would say he's a bit of a daredevil and has taken on challenges from jumping out of a hot air balloon at 10,000ft of course with a parachute to doing loop the loops whilst Wing Walking for the Bristol International Balloon Fiesta.

Not just limited to presenting the weather Alex has interviewed a number of celebrities from Olly Murs to JLS. He secretly has a passion for music having been part of a group in a former life and still does music in his spare time as part of writing duo GuBerry.

Away from the cameras, Alex Beresford has volunteered a lot of his time to children in disadvantaged areas of Britain and visited a number of schools. He was chosen as a role model and spent 3 years as a Reach Role Model which was a government funded project put together off the back of the Stephen Lawrence inquiry.

During his time, Alex went into schools, colleges, young offenders institutes and prisons with the aim of raising aspirations of young black boys and young black men.

How to book Alex Beresford for your event