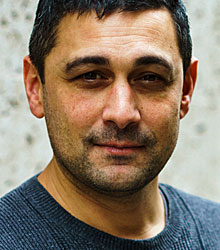 Adam Rutherford is the presenter of the flagship science programme on BBC Radio 4, Inside Science, as well as The Curious Cases of Rutherford and Fry, alongside Dr Hannah Fry.

He also presents many other Radio 4 documentaries on subjects ranging from the inheritance of intelligence, MMR and autism, epigenetics, human evolution, astronomy and art, science and cinema, scientific fraud, and the evolution of sex. He’s a regular guest on the Infinite Monkey Cage with Brian Cox and Robin Ince.

Adam has a PhD in genetics, a degree in evolutionary biology, is an honorary Research Fellow at UCL, and is a former Editor at the journal Nature. A science writer and broadcaster, he studied genetics at University College London, and during his PhD on the developing eye at the Institute of Child Health at Great Ormond St Hospital, he was part of a team that identified the first genetic cause of a form of childhood blindness.

On television he’s written and presented many documentaries, including The Beauty of Anatomy – a five-part series for BBC4 (2014) on the story of anatomical art. Horizon: Playing God (BBC2, Jan 2012) on genetic engineering and synthetic biology (winner of Golden Dragon Awards, Shanghai, 2012); The Gene Code (BBC4, Apr 2011), and The Cell (BBC4, Sept 2009) - a three-part series charting the story of biology- (winner Best Documentary at the ABSW awards (2010) & listed in the Daily Telegraph’s list of 10 Classic science programmes.)

He worked at the science journal Nature, during which time he launched and presented the award-winning Nature Podcast, and produced and directed many short films, including a music video tribute to the retiring Space Shuttle.

Adam’s critically acclaimed first book, Creation – on the origin and future of life - was published in 2013, and was nominated for the Wellcome Trust Book Prize.

In 2020, Adam wrote the Sunday Times Bestseller, How to Argue With a Racist, a fascinating and timely refutation of the casual racism that’s on the rise around the world. It is a manifesto for a twenty-first century understanding of human evolution and variation - and a weapon against scientific racism.

Adam Rutherford is a popular and in-demand speaker at events ranging form corporate conferences and seminars to science festivals and education events in schools and colleges.

He lectures extensively at UCL, where he has an Honorary Fellowship, and in public all around the world, including prestigious events such as the Douglas Adam’s Memorial Lecture, the British Humanist Association’s Darwin Day Lecture, The BFI, the Hay Festival, and the Cheltenham Literary and Science Festivals.

Below are three of Adam’s most popular presentations.

How to Argue With a Racist
The history of science, and notably of genetics, is inextricably entwined with empire, colonialism, and scientific racism. Ironically, genetics is the only discipline that has demonstrated the biological falsity of race.

Changing politics, the rise of consumer genetics and now COVID-19 have all injected racism back into a dominant role in the public discourse, and misuse, abuse and misunderstanding of science are being deployed to bolster prejudice. But whilst racist pseudoscience may be on the rise, science is no ally to racists. Instead, science and history can be powerful allies against bigotry, granting us the clearest view of how people actually are, rather than how we judge them to be.

How To Argue With A Racist dismantles outdated notions of race by illuminating what modern genetics can and can’t tell us about human difference. It is a vital manifesto for a twenty-first century understanding of human evolution and variation, and a timely weapon against the misuse of science to justify racism.

Book of Humans
We like to think of ourselves as exceptional beings, but are we really any more special than other animals? Humans are the slightest of twigs on a single family tree that encompasses four billion years, a lot of twists and turns, and a billion species.

All of those organisms are rooted in a single origin, with a common code that underwrites our existence. This paradox - that our biology is indistinct from all life, yet we consider ourselves to be special - lies at the heart of who we are.

In an original and entertaining tour of life on Earth, Adam Rutherford will explore how many of the things once considered to be exclusively human are not: we are not the only species that communicates, makes tools, utilises fire, or has sex for reasons other than to make new versions of ourselves. Evolution has, however, allowed us to develop our culture to a level of complexity that outstrips any other observed in nature.

A Brief History of Everyone Who Ever Lived
Sex, death, murder, disease, warfare, invasion, migration and famine. Of all the historical texts available to us, none is richer than the one we carry inside every cell. In the last few years, we have made extraordinary progress in our ability to read and understand DNA in the living, and to wheedle it out of people who may well have been dead for tens of thousands of years.

Only now, are we repainting the picture of the human story, using a unique combination of archaeology, history, art and our genomes. DNA is the saga of how we came to be who we are today.

We have been lucky enough to have Adam visit our school twice as a guest lecturer, as part of our outreach and enrichment programme. His lectures have been thoroughly enjoyed by parents and students alike, so much so that each year when reading through dozens of biology-related personal statements, I notice our students referring directly to Adam's talks, and how they have inspired further independent research or how they link to their chosen degree specialism.

Clients often ask about purchasing books for giveaways and delegate packs. Below you’ll find a selection of products by Dr Adam Rutherford. Click the images to view on Amazon's website. For bulk orders, please speak with your Booking Agent.

How to book Dr Adam Rutherford for your event