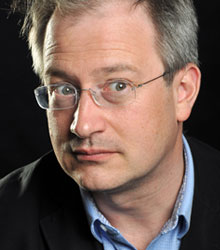 Robin Ince is best known as a comedian and populariser of scientific ideas. He began as a stand up comedian when he was 22 and was runner up in So You Think You’re Funny after a few gigs.

Robin is the creator and co-host of the podcast Robin and Josie’s Book Shambles, which gains over 100,000 hits a month, as well as the weekly music podcast with Michael Legge, Vitriola,which mixes nonsense, arguments and discussions on the latest music releases.

Robin has written several books, including Robin Ince’s Bad Book Club, How To Build A universe, Dead Funny and I’m A Joke And So Are You. The latter of which blends memoir, wit, and popular science to examine the human condition. Informed by personal insights from Robin as well as interviews with some of the world’s top comedians, neuroscientists and psychologists, the book is a hilarious and often moving primer to the mind. Includes interviews with Tim Minchin, Josie Long, Ricky Gervais, Barry Crimmins, Sara Pascoe, Sofie Hagen, Lenny Henry and more.

Numerous TV and radio appearances include Just a Minute, Mock the Week, and Never Mind the Buzzcocks.Robin has won three Chortle Awards, including the Time Out Outstanding Achievement Award and was nominated for Best Live Show at the British Comedy Awards.

Recently, he has received Honorary Fellowship of UCL, an honorary doctorate from Royal Holloway College (University of London), and is a fellow of the British Science Association.

Robin was relaxed, warm and funny, as well as incredibly well-informed and prepared; he set the tone of the evening perfectly.

Our ceremony is only as good as it’s host and many people remarked that they thought it was the best year yet. I’ve never seen a host do so much homework, take such a genuine interest, and chat to everyone involved. We would work with him every year if we could.

Clients often ask about purchasing books for giveaways and delegate packs. Below you’ll find a selection of products by Robin Ince. Click the images to view on Amazon's website. For bulk orders, please speak with your Booking Agent.

How to book Robin Ince for your event