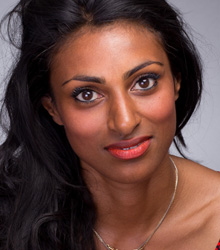 Dr Shini Somara is a passionate communicator in the world of science, technology and engineering, effortlessly transforming the complex world of cutting edge science and emerging technology into fascinating and entertaining television.

Her past work can be seen on The BBC, PBS Digital, Sky, Discovery and The Science Channel and TechKnow on Al Jazeera America from Los Angeles. She is the host of Crash Course Physics which reached in excess of 43.5 million views across all episodes in June 2021 and Crash Course Engineering. Again, achieving upwards of 8.2 million views over the series.

Shini Somara filmed a show for Sky 1 which, emphasising her passion for invention, saw Shini and co-host Jem Stansfield hunting through past UK patents for fabulous ideas that never quite happened. Once the best inventions were identified they helped build prototypes, refined inventors pitching skills and put them in front of industry leaders in the hope that they would get further funding to help bring their product to market.

In 2012, Dr Shini Somara travelled to all corners of the globe filming No Kitchen Required for BBC America. The show was a unique hybrid of travel, adventure and cookery, which celebrated the diversity of communities across the world. Shini was the show's host and as well as keeping the three chefs in check she immersed herself into the communities they visited, getting to know their history, customs and most of all how they enjoyed food.

Shini also co-presented The Health Show on BBC World News. The 26-part series covered the most important and dramatic health stories from around the world including family planning in Nigeria, rapid disease testing in Singapore, using larvicide to prevent malaria and ultrasound surgery.

Shini's ability to translate scientific theory into entertaining, interesting and digestible formats has given her the opportunity to contribute to various programmes including The One Show, Watchdog, Inside Out London and Something for the Weekend.

Behind the camera, Dr Shini Somara is still involved in various engineering projects, but also has a number of other achievements including a degree in classical ballet from the Royal Academy of Dance, a qualification in aerobics instruction and yet she's still found time to climb Mount Kilimanjaro and dabble in the world of fashion as a model.

Shini produces and hosts a podcast called Innervation, which explores EQ (emotional intelligence). On her previous (debut) podcast, Scilence, which she launched on International Women in Engineering Day 2018, women in STEM would share their life stories and experiences. All guests on Scilence were kept anonymous to encourage open and honest discussions about what it is like to work in an industry dominated by males.

Shini is an author of six children's STEM books.  Her first series with Hachette includes four titles (6-8 year olds), An Engineer Like Me; A Scientist Like Me; A Coder Like Me and A Mathematician Like Me.   She has also written two books for PanMacmillan on Energy and Physics (9-11 year olds).  She is currently writing her 7th book for 11+ year olds.

Shini Somara is an Imperial College mentor for Masters and PhD engineering students. She encourages and supports women and girls of all ages in STEM to be their best.

Thank you very much indeed for coming to our speech day on Saturday. It was great to see you there, and your speech hit all the right spots and fitted into the overall day perfectly. All the feedback that I have had is excellent, and I know the girls and parents had a great day - so did I!! It was a pleasure to meet you, and I do hope all your future plans come to fruition. Keep in touch with the school if you are able to!

Clients often ask about purchasing books for giveaways and delegate packs. Below you’ll find a selection of products by Dr Shini Somara. Click the images to view on Amazon's website. For bulk orders, please speak with your Booking Agent.

How to book Dr Shini Somara for your event