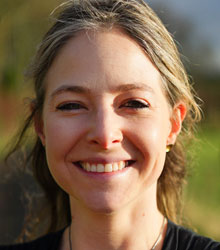 Professor Alice Roberts is a biological anthropologist, author and broadcaster. She’s interested in the evolution, structure and function of humans, and our place in the wider environment.

Originally Alice studied and practiced medicine, before she became a university lecturer, focusing on biological, evolutionary anthropology. She is passionate about public engagement with university research and teaching, and advocates a wider role for universities in society. In 2012 this passion was recognised when she became the first Professor of Public Engagement in Science at the University of Birmingham. She has worked extensively with the Wellcome Trust and other institutions in public engagement roles.

Alice Roberts has presented a wide range of biology and archaeology programmes on television. Her television debut came as a human bone expert on Channel 4’s Time Team, in 2001. After presenting Coast on BBC2, she went on to write and present a range of BBC series, including The Incredible Human Journey, Origins of Us, Prehistoric Autopsy and Digging for Britain, as well as several Horizon programmes.

Alice has written nine popular science books, including The Incredible Human Journey, Evolution: The Human Story, The Incredible Unlikeliness of Being, and her latest - Tamed: Ten species that changed our world.

Alice Roberts is an accomplished public speaker and regularly tours the country giving lectures related to her books and television programmes. She has conducted many panel debates and interviews and has interviewed Sir David Attenborough live on stage at the Science Museum, and Professor Richard Dawkins at the RI.

Alice is also an experienced compere, having hosted numerous corporate and industry awards ceremonies and launch events, including prestigious events at the Natural History Museum and the Royal Society.

She is also an adept and frequently requested after dinner speaker.

Alice has lots of prepared talks, just a couple of her more popular ones are listed below:

Digging Into Britain’s Past
In this exclusive tour, Alice will share insights, anecdotes and behind-the-scenes stories from her personal journey to explore Britain’s past, with footage from her programmes and excerpts from her books. Each show will finish with 15 minutes Q&A.

Tamed: three species that changed our world . . .
Join Alice Roberts as she delves into archaeology, history and genetics to reveal the amazing stories of three species that became our allies. She reveals how becoming part of our world changed these animals- essential to the survival and success of our own species.

A short personal message to say thank you for your highly valuable contribution this week. The meetings went so much smoother with you at the helm and the discussions were great. I hope to have the opportunity to work with you again in future.

Clients often ask about purchasing books for giveaways and delegate packs. Below you’ll find a selection of products by Alice Roberts. Click the images to view on Amazon's website. For bulk orders, please speak with your Booking Agent.

How to book Alice Roberts for your event