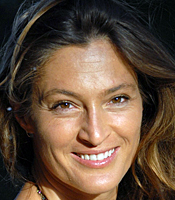 Saba Douglas-Hamilton is one of the BBC's most popular natural history presenters, and a captivating public speaker on a wide range of subjects in the fields of wildlife, anthropology, conservation, travel and film making.

Saba's unusual upbringing in Africa and her astonishing wildlife adventures, often under extreme conditions, combine to make an entertaining, enlightening and informative experience for audiences from the academic to the corporate.

Saba is best known for her myriad wildlife documentaries for BBC TV including, for the Wild strand, Escape the Elephant, Running with Reindeer, The Miracle Lioness, Search for Tigers, Search for Polar Bears, and finally Unknown Africa which featured Angola, the Comoros Islands and the Central African Republic.

She co-presents the ever-popular Big Cat Diary and has produced and presented her own films for Animal Planet's Mutual of Omaha series, winning multiple awards for Heart of Lioness and Saba and the Rhino's Secret.

She has also reported for the BBC's Holiday programme from exotic locations such as Brunei, Ethiopia, Papua New Guinea and Antarctica. Her series, The Secret Life of Elephants, about her family's research and conservation work in Kenya, was broadcast to much acclaim.

Born and raised in Kenya by her zoologist father and author mother, her total immersion in African culture and wildlife, together with a first class degree in Social Anthropology, made her a compelling and knowledgeable presenter on the BBC's hugely successful series 'Big Cat Diaries' and 'Wild'.

She has also produced, directed and presented a wide variety of programmes for the Discovery Channel and Animal Planet, winning multiple awards for Heart of a Lioness and Saba and the Rhino's Secret. Her documentary series Unknown Africa shone a light on the African continent with features on Angola, the Comoros Islands and the Central African Republic.

A trustee of Save the Elephants and tirelessly committed to the conservation of African wildlife and its indigenous people, Saba's passion and insight make her a captivating and animated public speaker. She has spoken worldwide on topics ranging from HIV to peace negotiations in Kenya and is a regular guest speaker at the Royal Geographical Society where she is a Fellow.

Saba Douglas-Hamilton is available for awards hosting, business keynote and after dinner speaking.

As an engaging and knowledgeable keynote speaker for any size of audience, Saba Douglas-Hamilton's presentations focus on her wealth of experience in working with and protecting wildlife.

She is an ardent conservationist, a trustee of the charity Save the Elephants in Kenya, and friend of Save the Rhino Trust in Namibia. With a strong academic background in anthropology and having been brought up amongst wild animals in the African bush, Saba's lectures bring the resonance of Africa's wildlife and people to the fore, and examine the key issues affecting our environment and future. She is also an outspoken campaigner for Concerned Citizens for Peace in Kenya.

Saba Douglas-Hamilton has lectured at the Royal Geographical Society where she is a fellow, for Fauna and Flora International, Tusk Trust, and the David Shepherd Wildlife Foundation.

Large corporate events include Wines of South Africa and Discover the World at the Destinations Travel and Holiday Show at Earl's Court. Saba is also a popular choice to host fundraising as well as publishing events such as the BBC Wildlife Magazine's Wildlife Photographer of the Year Awards at the Natural History Museum.

Saba Douglas-Hamilton seems savvy about all creatures and demonstrates an easy rapport with elephants, indigenous tribesmen and quirky scientists alike. She is lovely, like an earthier Natascha McElhone, and her mellifluous narration aspires to Isak Dinesen.

The difference Saba's presence and contribution made to our evening was incredible, and we are very grateful and appreciative for her time.

Saba was a complete star – she won the hearts of everyone in the room and you could have heard a pin drop during her talk. She has proved to be an invaluable ambassador for wildlife.

Clients often ask about purchasing books for giveaways and delegate packs. Below you’ll find a selection of products by Saba Douglas-Hamilton. Click the images to view on Amazon's website. For bulk orders, please speak with your Booking Agent.

How to book Saba Douglas-Hamilton for your event