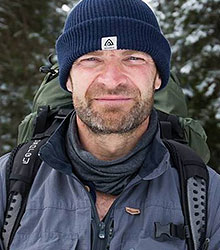 Monty Halls is an adventurer, former Royal Marines Officer, professional diver and a trained marine biologist. He has led teams through some of the most demanding environments and his adventures include discovering prehistoric settlements amid great white sharks, avoiding the bullets of poachers, and photographing a dangerous, rare crocodile underwater for the first time.

Over the last twenty years, Monty has established a reputation as one of the most entertaining and thought-provoking speakers in the UK. His talks cover the full range of events and occasions – from small, intimate dinners and seminars, through to international conferences with several thousand delegates. Based on his experiences as a Royal Marines Officer, as an expedition leader, working with natural history film crews, and as a TV presenter and broadcaster, Monty’s talks are full of memorable moments and engender complete engagement.

A popular TV presenter, his ongoing series of 'Monty Halls' Great Escape' for the BBC has been enthusiastically reviewed around the world. 'Monty Halls' Great Escape' series (BBC2) has been widely acclaimed and shown worldwide. In series one Monty lived in Applecross on the West Coast of Scotland for six months filming the wildlife, culture and community life of this beautiful area.

Series two followed Monty's experiences living in the Outer Hebrides for six months working as a volunteer wildlife ranger and living in a restored crofter's cottage with his dog Reuben (Reubs) - the real star of each series!. The third series, 'Monty Halls' Great Irish Escape' shows Monty in Connemara on the West coast of Ireland working with the Irish Whale and Dolphin Conservation Group.

What is unusual about many of Monty Halls' expeditions is that he often has to turn inexperienced individuals into effective teams that will cope with projects in extraordinary environments. Taking disparate groups, identifying a clear aim, and then creating the momentum and techniques to overcome any obstacle to achieve results - this a challenge Monty Halls undertakes with characteristic gusto. His teams operate in some of the most rapidly changing environments on earth, and yet must learn to flex, evolve and adapt to their surroundings.

He is patron of several international charities including Help for Heroes, The Shark Trust, The Whale and Dolphin Conservation Society and he is Honorary Ambassador to the Galapagos Conservation Trust.

An entertaining and dynamic force on the podium, through his keynote business and motivational presentations Monty Halls is able to address topics such as effective leadership, teamwork, risk, staying motivated, teams under stress, embracing change, co-operation and how to maintain the aim in a changing environment. He also gives a candid insight into filming 'The Great Escape' series.

Monty's style as a TV presenter exudes his enthusiasm, energy, passion and sense of fun - qualities and talents he brings to every speaking engagement and every expedition that he has lead. His style is exceptionally dynamic, light-hearted, frequently hilarious, and open to investigation and questioning from the floor.

Monty Halls excels at entertaining his audience and delivers powerful business messages. He has an engaging personality and has variously been called 'the shark whisperer', 'the new Cousteau' and 'a cross between Indiana Jones and a male model'.

Speech Topics & Themes
The predominant themes in Monty Halls’ talks are the adventures and mishaps of the individuals and groups he has worked with, allowing pertinent team building and leadership messages to be incorporated through outstanding storytelling.

Monty has had the good fortune to be accompanied by truly world-class cameramen and photographers on many of his projects, resulting in a series of beautiful images and stunning video footage. These act as a vivid backdrop to his presentations, bringing the stories alive and creating an unforgettable experience for those in the audience.

Inspirational - Monty Halls’ presentations have achieved real status on the speaking circuit for one main reason - the ability to inspire. Feedback from organisations and events large and small note his ability to energise and galvanise the audience.

Humorous & Engaging - The efforts of teams and leaders to perform invariably involve soaring highs and calamitous lows. Monty’s ability to explore such moments with humour and a light touch keeps audiences consistently engaged.

Thought Provoking - A great speech makes the audience look at themselves - how they operate as individuals, as teams, as leaders, or as an organisation. This is a powerful tool, and one incorporated into every event.

All Encompassing - Whether you require a call to action for a new organisation, a humorous after dinner speech, a celebration of a great year, a team seminar, or a simple presentation with clear messages to a small group, Monty Halls has experience of them all.

The presentation really was quite superb and totally met my brief. It was interesting, engaging, funny, exciting and as I say totally hit the mark with the brief and more importantly, the team. Several people stated that Monty Halls was the best motivational speaker we've ever had.

Monty Halls was a big hit and we have had lots of positive feedback. His presentation was motivating and funny and he really worked the networking theme into it. It was great that he was able to stay after the talk and mingle with our guests. They all really enjoyed his company. We were all extremely pleased with the evening and wouldn't hesitate to recommend him.

Monty Halls is an outstanding speaker and even audiences who are jaded by conference overload are electrified by his passion and zest for life. We wanted our conference to end with a bang - and with Monty we got something on an atomic scale. Hire him whilst you can still afford him, and remind everyone to fasten seat belts and extinguish cigarettes before the talk begins!

I just wanted to drop you an email and say an enormous thank you to Monty Halls for being our after dinner speaker at our International Business Awards. He went down an absolute storm; the whole audience was captivated by his entertaining style, energy and superb speech. He was also excellent company throughout dinner!

Monty Halls gave an outstanding presentation... His talk was engaging, humorous and challenged our audience to step outside of their comfort zones. This guy has been there done it and really knows how to talk about it!

Monty Halls combined entertainment, motivation and key messages, at the same time as meeting our brief 100%.

The feedback has been exceptional and they are overwhelmed by Monty's application and ability to mould his experiences to their world.

The event went even better than we could have hoped and Monty was a delight. He had obviously spent some considerable time before the event, incorporating our key messages into his presentation and the resulting mix was both entertaining and informative. Our Execs were so pleased that we were able to find someone who could deliver a message with so much humour and honesty.

Clients often ask about purchasing books for giveaways and delegate packs. Below you’ll find a selection of products by Monty Halls. Click the images to view on Amazon's website. For bulk orders, please speak with your Booking Agent.

How to book Monty Halls for your event