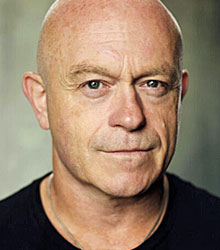 Ross Kemp is a BAFTA award-winning actor, author and journalist, who rose to prominence in the role of Grant Mitchell in the BBC soap opera, EastEnders.Since 2006 he has received international recognition as an investigative journalist for his critically acclaimed, award-winning documentaries.

Ross began his acting career on stage with the likes of John Thaw and Richard Wilson. He soon moved into television and his early roles included parts in Emmerdale Farm, London’s Burning, and Birds of a Feather, although he is best known for playing the role of Grant Mitchell in Eastenders, brother to Phil Mitchell (Steve McFadden) and the son of Peggy Mitchell (Barbara Windsor). During his 10 years playing the role he won a number of awards, including ‘Best Actor’ from British Soap Awards, Inside Soap Awards, and TV Quick and Choice Awards, as well as numerous other nominations.

In recent years Ross has built a reputation as one of TV’s most exciting and hard-hitting documentary makers. After a brief meeting with a member of the infamous ‘Bloods’ gang in California, Ross went to Sky 1 with the idea for a new series, Gangs, for which he won a BAFTA for Best Factual Series and was nominated on another occasion.

After making 27 programmes around the world, Ross moved on from Gangs to a new series: Ross Kemp in Afghanistan, where he spent time from 2007 to 2012 with army regiments: 1 Royal Anglian, 5 Scots, 1 Royal Irish, and twice with 45 Commando. Ross and his team were nominated for a ‘Best Factual Series’ BAFTA, and won an AIB International Media Excellence Award for ‘International TV Personality’.

Ross and his team have also made documentaries on international piracy, in Gaza, Israel and the Amazon Rainforest. His production company Freshwater Films has also made several series of Extreme World, a documentary that sees Ross travel the world to destinations such as Pakistan, Papua New Guinea, The Congo and Ukraine.

After Dinner & Motivational Speaking
Actor turned award winning documentary maker, author and actor Ross Kemp shares his personal experiences, both humorous and heart breaking, from some of the world’s most dangerous people and places.

From El Salvador to East Timor and from Moscow to South Africa, Ross delivers the brutal untold story of our diverse world in this no-holds-barred evening. Be prepared to laugh, cry and rethink who and what we are.

Ross Kemp was fantastic. His speech was great and his patience with everyone who wanted his autograph and photo was superb.

Thank you so much for joining us as our Guest Speaker at the UJIA Manchester Dinner on Monday evening. Your interesting and information interview where you talked about your acting, your TV series about gang culture and, in particular, your experiences in the Middle East, helped contribute to what was a most successful event. The feedback from our guests has been highly positive.

We had some great feedback from our event yesterday. We always try to end the day on a completely different note, giving the guys and gals a guest who has an interesting story to tell... and without doubt Ross Kemp has a story to tell! He went down a storm with the attendees, one comment being “he's one of the best speakers I have seen and I must have seen about 40 plus, very captivating and obviously very passionate about what he does”.

Ross Kemp was a fantastic speaker at our recent awards event. He kept everyone interested and entertained with his stories and was great with all our guests, taking time to answer questions and take photos. We were delighted with our choice to use Ross, it made our event. Thank you.

Clients often ask about purchasing books for giveaways and delegate packs. Below you’ll find a selection of products by Ross Kemp. Click the images to view on Amazon's website. For bulk orders, please speak with your Booking Agent.

How to book Ross Kemp for your event