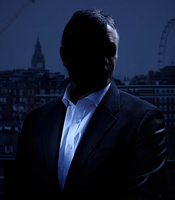 Andy McNab joined the Royal Green Jackets in 1976 as a boy soldier. In 1984 he was badged as a member of 22 SAS Regiment. He served in B Squadron 22 SAS for ten years and worked on both covert and overt special operations with police forces, prison services, anti-drug forces and western backed guerrilla movements, as well as on conventional special operations.

In Northern Ireland Andy spent two years working as an undercover operator with 14th Intelligence Group, going on to become an instructor. He also worked as an instructor on the SAS selection and training team and trained foreign special forces in counter terrorism, hostage rescue and survival techniques.

In the first Gulf War, Andy McNab commanded the famous Bravo Two Zero patrol. The patrol infiltrated Iraq in January 1991, but were soon compromised. A fierce fire fight with Iraqi troops ensued and the patrol was forced to escape and evade on foot to Syria. Three of the eight men were killed; four were captured after three days on the run; one escaped.

One of the four taken prisoner, Andy was held for six weeks and was relentlessly and savagely tortured. He suffered nerve damage to both hands, a dislocated shoulder, kidney and liver damage and contracted hepatitis. After six months of medical treatment he was back on active service. The most highly decorated patrol since the Boer War, the heroic exploits of the Bravo Two Zero patrol have been recognised the world over and, in the words of the patrol's commanding officer 'will remain in Regimental history forever'.

Andy McNab was awarded both the Distinguished Conduct Medal (DCM) and Military Medal (MM) during his military career and was the British Army's most highly decorated serving soldier when he left the SAS in February 1993.

He has written about his experiences in the SAS in three bestselling books, Bravo Two Zero (1993), Immediate Action (1995) and Seven Troop (2008). Bravo Two Zero is the highest selling war book of all time and has sold over 1.8 million copies in the UK. It has been published in 17 countries and translated into 16 languages.

He was technical weapons advisor and trainer on the hit Michael Mann film Heat (1995) and spent five months in Hollywood working closely with Robert De Niro, Al Pacino and Val Kilmer. As a director of a Hereford based security company, McNab developed and runs a specialist training course for news crews, journalists and members of non-governmental organisations working in hostile environments.

In 2017 Andy McNab was awarded a CBE in the Queen’s Birthday Honours List for services to Literacy and charity.

Andy McNab is a highly engaging and entertaining after dinner speaker, renowned for his leadership and motivational skills, he delivers stories of his career, beginning with his time in the SAS right up to life as a best-selling thriller writer, with great charm and a highly enthralling anecdotal style.

One of the most extraordinary examples of human courage and survival in modern warfare.

Has a flair for storytelling... McNab's great advantage over other writers is his knowledge of what it is actually like to be in very dangerous situations.

Clients often ask about purchasing books for giveaways and delegate packs. Below you’ll find a selection of products by Andy McNab CBE, DCM. Click the images to view on Amazon's website. For bulk orders, please speak with your Booking Agent.

How to book Andy McNab CBE, DCM for your event