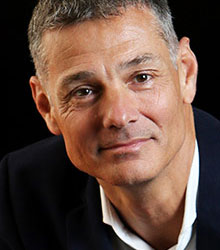 John Peters knows about dealing with uncertainty, change and performing under pressure. He came to the world's attention during the Gulf War in January 1991 when, as a Prisoner of War, the enduring, iconic image of his battered, bruised and disfigured face was paraded around the world on television by Saddam Hussein's brutal regime.

It is his insight and ability to relate this to everyday challenges that keeps him a unique, contemporary speaker that is in constant demand and why so many are eager to hear him speak.

John's dramatic and sometimes harrowing experiences reach deep into our innermost minds, showing us how we can overcome even our worst fears and nightmares. His war was not all as he expected – it became a seven-week ordeal of torture and interrogation testing John Peters to the absolute limit and bringing him close to death.

With over 20 successful years on the public speaking circuit, John Peters has gained an international reputation as an exceptional and versatile speaker with audiences worldwide ranging from 5 to 5500 people including corporates, public sector and charities.

Of note, he was the sole reader representing the British Armed Forces at the National Gulf Memorial Service, in front of Her Majesty, The Queen and presented the Sir James Martin Lecture at the Royal Aeronautical Society in the presence of Prince Philip and followed Mr Nelson Mandela on stage in South Africa.

He has written two best-selling books and the documentary, ‘Tornado Down' was Independent Documentary of the Year and a BAFTA Award Nominee. He has extensive international TV, radio, PR and media experience.

During his RAF career, he flew Tornado GR1 on various squadrons and then, within the MoD, he led programmes on leadership, safety and human error in aviation. Using this experience, on leaving the RAF, he founded a management consultancy providing business critical development, consulting and coaching - through a leadership lens.

John now has over a decade's experience in business consulting developing senior business leaders with a particular focus on leadership, resilience, uncertainty, motivation, strategy and change. These unique attributes allow John to seamlessly tailor a speech to whatever the client's requirements may be and thereby supply the perfect address for any event. His insights generate actions; these actions inspire performance.

Clients include Capital One, Virgin Media, NDS, Lloyds Bank to name a few. With particular areas of interest being uncertainty, organisational learning, trust and failure, he is currently writing a book on leadership. As the Director of Performance, he designed the Executive MBA at Aston Business School.

He is Fellow of Kingston Business School and Henley Business School and a former Chair of the Association of MBAs. In addition he runs the Leadership Module on the EMBA at the Academy of National Economic in Moscow. He is Patron to the charity, KidsOut, Honorary President of Throckmorton Airshow and a Governor of Worcester Royal Grammar School.

John Peters is a highly accomplished and versatile international public speaker. Many will remember him from the 1991 Gulf War when, as a Prisoner of War, the enduring, iconic image of his battered and bruised face was paraded on television by Saddam Hussein’s brutal regime.

His ordeal was one of seven weeks of physical and psychological torture. Since that defining moment, John has used his experience to inspire and motivate audiences from around the world, earning him a reputation for being one of the best there is.

What’s more, having run a business consultancy focused on helping senior executives with leadership, strategy and change, he is superb at appreciating business challenges to translate and tailor his story to your organisation’s needs.

Far from being a doom and gloom merchant, his innate sense of timing and humour equips him with the dynamism to capture the spirit of any event.
John’s expertise lies in the following themes and he is able to provide a speech focused on any of them:

John Peters is consistently in demand for keynotes, conferences, after-dinner speeches and luncheons. His clients include every kind of organisation from FTSE Global 100 firms and the public sector to charities and local primary schools.

He has vast experience of speaking to diverse and international audiences including America, Australia, Hong Kong, Kuwait, Russia, France, Canada, Sweden, Norway, Denmark, Portugal, Spain and the Republic of Ireland.

To be in a room containing over 200 people with total silence was awesome and I can't remember that ever happening before. I don't know if you were aware of the silence but there wasn't a single cough, any sound of people whispering or shuffling, just stillness. I think that some people had even forgotten to breathe!

As one small part of this nation, we thank you too for the immense burden you had to bear in representing us as a Member of our military forces at war.

Not only was John Peters an excellent presenter he was also an organiser's dream in both his professionalism, his flexibility and his genuine enthusiasm in mixing and mingling with the delegates after the session.

One minute I wanted to cry my eyes out and the next minute you had me laughing out loud…. The feedback has been incredible. Twitter has gone mad. Thought provoking, empowering, inspirational are just a few of words people have used to describe yesterday's event.

Anyone who has had the privilege of listening to you speak cannot be anything other than impressed by your attitude to life and your determination, courage and integrity. Yours is a gripping and extremely moving story. Everyone to whom I have spoken since your presentation has unreservedly said that it was excellent.

Your ability to describe your ordeal was so clear: I felt that I was in the plane with you, in the desert with you and in the cell with you. I know I could never possible imagine, for real, what you went through and I sincerely hope no-one else ever has to endure that sort of treatment again.

When you got up to speak, I really wasn't sure what to expect, I was quite young during the Gulf war (now 26) so I suppose wasn't that aware of who you were or indeed, what happened to you. By the time you left the stage, I was totally amazed by your experience and in awe of your courage.

The effect you provoked was extraordinary. You made an outstanding, brave and emotionally honest presentation which moved and inspired us all. What you communicated about how you felt and what you had learnt about yourself touched a chord, I know, in every individual present – in a unique and profound way.

Clients often ask about purchasing books for giveaways and delegate packs. Below you’ll find a selection of products by John Peters. Click the images to view on Amazon's website. For bulk orders, please speak with your Booking Agent.

How to book John Peters for your event