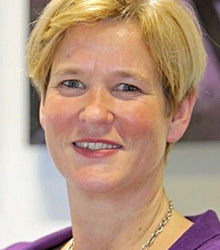 Finding a love of flying early in life, Mandy Hickson fought hard to achieve her ambition to be a Royal Air Force pilot. She succeeded, and became only the second woman (and one of only three to-date) to fly the multimillion pound Tornado GR4 Jet, completing three tours of duty and a total of 45 missions over Iraq — dodging enemy fire on an almost daily basis.

On the front line she had taken part in numerous bombing and combat missions. Mandy was posted to the II (AC) Squadron, based out of RAF Marham in Norfolk and defended the infamous ‘No Fly Zone’ in the Gulf between the two Gulf wars.

Carrying the latest weaponry she and her unit were ready to drop ordnance on any target in support of operations. Mandy’s life was frequently in danger but she never felt any fear: “when you’re doing the job, you’re just doing the job,” she explains.

Mandy was one of the first girls to join the Air Training Corps, when she was 13 years old. Surprisingly, it wasn’t the prospect of flying which interested her but canoeing, which the Corps also ran, that attracted her, but soon she was hooked. Mandy started flying lessons when she was 17 and had learnt to fly a plane before she could drive a car, joining the RAF aged 21.

However, despite her prowess in the skies, Mandy twice failed the computer based aptitude tests, taken by all potential RAF pilots (and the maximum number of tests allowed). Undeterred, her self-belief and dogged determination persuaded the RAF to take her on as a test case, thereby overcoming seemingly insurmountable hurdles.

When life is on the line, pilots must be rigourously trained and exercises carefully planned and evaluated. There’s much learning from this that can be shared with business from such careful strategy, training, planning and debriefing. Mandy became the Squadron’s Combat Survival and Rescue Officer, working closely with the US, instructing Squadron members on Escape and Evasion tactics.

Throughout her time in the RAF, Mandy Hickson was the only female aircrew and later learned the lessons of juggling life as a working mother of two young children. Now a civilian, she draws on her experiences to train and inspire others, covering the core areas of human factors; decision making, communication, leadership, behaviour, workload, conflict, fatigue and stress management. Mandy is also a highly sought after keynote motivational speaker in the business and education sectors.

Since leaving the RAF she has served as a school governor, on the board of trustees at the Victory Services Club, London, is ambassador for sport for Hampshire County Council and has been the Chairman of her local tennis club.

In 2020, Mandy published her autobiography, An Officer, Not a Gentleman: The inspirational journey of a pioneering female fighter pilot.

Keynote & Motivational Speaking
Challenging times require an exceptional corporate response. So how do you motivate and inspire your staff to demonstrate outstanding leadership and teamwork under pressure; to stride confidently towards purposeful goals and maintain focus despite great risks?

These critical success factors are clearly demonstrated by Mandy Hickson’s unique experiences of flying in a Front Line Tornado Squadron within hostile environments. Mandy is supporting an increasing number of organisations as a keynote or motivational speaker.

Tailored to your organisation and the aims / objectives of your event, Mandy’s main speech themes are:
• The building and empowerment of effective teams
• Inspired goal setting and ultimate focus
• Decision making under extreme pressure
• Maintaining momentum despite losing top talent
• Nurturing a culture of self-confidence and aspiration

Understanding Risk
Risk, the probability or threat of damage, injury, liability, loss or any other negative occurrence that’s caused by external or internal vulnerabilities, and that can be avoided through pre-emptive action, calls for a different kind of thinking. One that sees people as the source of diversity, insight, creativity, and wisdom, not as sources of risk that undermine an otherwise safe system. We need to transition from seeing risk management as an absence of negatives to seeing it as the presence of a positive capacity and a focus on safety.

Teamwork and Leadership
Supportive leaders are crucial to any successful enterprise, and teaching managers how or when to flex their leadership styles will help them tune-in better to employees’ changing needs. Understanding employees’ own natural working styles is a very effective way of building cohesiveness and understanding within teams and can be done at no cost other than an hour or two of time; it’s the understanding of what makes the members of your team tick.

Employees feel far more engaged when they understand their role within the clear vision and strategy of the company. Mandy looks at the communication skill which should be as much about listening as it is about sharing, and should empower employees to talk about their concerns. If employees feel that they have a voice and that voice is not just heard, but acted upon then the benefits can be enormous.

Crisis Planning
A crisis has three elements: A threat, an element of surprise and a short decision time. Mandy Hickson will introduce you to different models which shifts the thinking to the left, and changes your attitude towards handling a crisis. Crisis Management planning should be just as high a priority as any other business planning. We practice different scenarios to ensure that in the event of a crisis the team are simply running through a programmed reaction.

Threat and Error Management
Mandy Hickson looks at changing organisational culture to become ‘just’, and recognises that competent professionals make mistakes and acknowledges that even the most competent of professionals will develop unhealthy norms (shortcuts, routine rule violations), but has zero tolerance for reckless behaviour.

Consequently, when a mistake occurs, people talk about it openly and report it, so the business can build up a picture of where the biggest threats lie and make risk-based decisions. If the open and just culture does not exist, you are effectively flying blind.

Human Factors
Analysis from many industry sectors has indicated that up to 80% of accident causes can be attributed to human factors (Helmreich, 2000). This means that leaders need to understand the human dimension to their business – what factors enhance performance. They are not new or mysterious skills but are essentially what the most successful team members do, to achieve consistently high performance, and what everyone else does on a good day.

This is where Mandy Hickson can help. She uses proven techniques to help to protect your business and reputation. Using facilitated training sessions that are designed to be fun but with a serious ‘take away’ message. Her aim is to provide you with practical tools that you can use effectively and daily.

Facilitated Debriefing
Every single time fighter pilots fly they make the time afterwards to debrief the mission. The hierarchical structure is left outside the room as the important aspect is that everyone has a voice, the ability to speak up.

They run through a set process, looking at ‘What’ happened (the facts), ‘Why’ it happened (the cause), because they are trying to get to ‘How’ (the cure). How we can improve our performance the next time? Mandy Hickson will share the necessary tools that you can use practically to improve team performance on a daily basis.

We really appreciate the energy and enthusiasm she brought to a really inspiring speech. I’ve already heard lots of really positive comments and she was, without doubt, the stand-out session of the day. “Awesome” was a term used a few times by my colleagues!

Mandy Hickson was absolute brilliant, I would highly recommend Mandy for any event We hung on every word and still wanted more after two & half hours. I personally came out on a massive high.

Mandy Hickson spoke with such passion, energy and enthusiasm; had the audience laughing at times and in total silence at others, as she linked her personal experience in the RAF with nursing. She had taken the time to understand the values our staff developed, and was able to thread those through her whole speech. It was truly inspirational and I would not hesitate to recommend her.

Mandy, great to meet you. Your session was particularly well received. I am delighted I was able to stay to hear you talk. Your story is very inspirational and I recognised many of the challenges you have faced as a woman in a predominantly male world as these issues are industry agnostic. I am sure we could spend hours sharing our war stories (literal and metaphorical!). I do all I can to help the next generation navigate these challenges and not experience the same difficulties as those who have gone before. You are clearly doing the same.

Mandy Hickson is a fantastic public speaker. She is both inspirational and extremely well prepared. Her ability to relate her own experience working under extreme pressure and in highly performing teams to everyday situations is most impressive. She tops it all with a wonderful sense of humour and great modesty. Listening to her talking about the many challenges that she has successfully overcome should be compulsory for all girls!

I just wanted to let you know that we have had many speakers in the past, some really well known like Sir Ranulph Fiennes who have all been quite excellent. But the feedback we had from our sales team about your talk was without exception the best ever. Really well done, thank you. Your story is a great one but the way you link it to our company goals was 'spot-on' and made it more useful. I would have no hesitation in recommending you as the best speaker we have employed and we've been doing this for 15 years!

I have to say that I had high expectations – and you surpassed them all. You were brilliant!

Mandy Hickson's true ability was to capture the essence of team working, resilience and the importance of leadership within a context of energy, enthusiasm, commitment and humour. This was not only by using her own experiences, which in themselves were exceptional but she had also researched our organisation and weaved our own Trust values and mission statement into her presentation. Mandy's messages cross any and all boundaries and I would suggest apply in any setting. It was a real pleasure for us to spend time with her.

Clients often ask about purchasing books for giveaways and delegate packs. Below you’ll find a selection of products by Mandy Hickson. Click the images to view on Amazon's website. For bulk orders, please speak with your Booking Agent.

How to book Mandy Hickson for your event