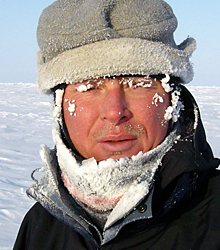 Alan Chambers MBE is a polar adventurer and motivational speaker who, after spending five years researching, planning and training, led the first successful British unsupported expedition from Canada to the Geographic North Pole.

Walking 672 miles in temperatures as low as -65°C and dragging a sledge the weight of a baby elephant, after a gruelling seventy days on the ice, Alan and team mate Charlie Paton, raised the Union Jack on top of the world at 23:16 on 16th May 2000.

In 2006, Alan led a team and completed the gruelling Yukon Arctic Ultra Challenge. Then in 2008, he led a team across Greenland to engage 10,000 school children and highlight climate change. In 2009, he lead a team of senior executives and high achievers to the South Pole.

Alan has subsequently led more than a dozen successful North Pole expeditions with top business leaders & chief executives, in order to help them explore and reflect on their own leadership capabilities.

A former Royal Marine Commando with 16 years service, Alan Chambers was a member of the first winter expedition to traverse Iceland by ski in 1995, he has sledged across Greenland, Canada North West Territories, Norway and Iceland.

In 2018, Alan wrote his second book, Lead Yourself to Success: Ordinary People Achieving Extraordinary Results Through Self-leadership. Published by Whiley & Sons, he explains and demonstrates a powerful set of practical skills for achieving success through courage, determination, unselfishness and humour in the face of adversity.

Whilst Alan has led many expeditions to the North and South poles, you don't have to lead a national team or a multinational corporation to be successful, as long as you can lead yourself. The desire to learn is human nature, and lessons from those who have been where you want to go are extraordinary opportunities. You gain the insight and guidance you need to get there, and learn how to lead your own expedition down the path to success.

Like any adventure, good preparation is key. You don't take off for the North pole on a whim, and you don't just leap into leadership without understanding the responsibilities it entails. Alan shows you how to develop the leadership mindset to get wherever you want to go in life, trust your own judgement and come out on top of the world.

Alan was invited to speak by Sir Clive Woodward to the England rugby football senior squad in preparation for the rugby world cup 2003, concentrating on project focus, maintaining direction in adversity and the change that will have to be adapted to. Martin Johnson, Captain England winning rugby World Cup team said "Alan's amazing story highlighting the remarkable focus & leadership he had around the north pole trip truly inspired the team in their preparation for the Rugby World Cup 2003."

He was then invited to speak to the England cricket ashes team. Focusing on the mental endurance and winning belief needed to achieve regaining the ashes, Duncan Fletcher, England ashes Head Coach commented "Alan Chambers was with us all the way through the ashes, if only from a distance. At every turn he recognised a situation from his journey and related it to that which we were encountering. That was great to know and provided excellent motivation, as well as a frequent good talking point..."

In 2000, Alan Chambers was awarded an MBE by HM The Queen for ‘determination and leadership in constant adversity'. He is also a qualified diver, parachutist, paramedic and ski survival instructor.

Alan Chambers MBE helps thousands of people every year unlock the door to higher performance. Every single one of those people was a leader waiting to happen, even if they didn't know it, but once they truly realised where their potential could take them, they became unstoppable.

Inspiring Motivational Speaking
Alan has inspired individuals from all walks of life with his unique story of the major North Pole expedition across the world and engages audiences in his story at a deep level, with a likeable yet determined style of leadership. These talks deliver high performance motivational business lessons in a practical and manageable way.

In this capacity Alan delivered highly successful motivational presentations to the 2003 England winning World Cup Rugby team, at the request of Sir Clive Woodward, and in 2005 the England Ashes cricket winning team. Both teams wanted to concentrate on focus, maintaining direction in adversity and the change required for the adaptation.

Alan Chambers is a sought-after motivational speaker and workshop leader on topics such as creating a vision, leading a team and building mental strength.

Alan delivers more than 100 tailor-made motivational talks and workshops each year for individuals and organisations of all sizes from small SMEs to global blue-chip organisations. His standard format is a one-hour motivational talk followed by Q&A with the audience. This can be followed with an interactive hands-on workshop.

Alan is an excellent speaker, enthralling stories and first class entertainment. In the talks he does with business leaders he always manages to connect and draw parallels with the challenges faced by the audience and polar exploration. Perfect as an after dinner guest, project kick off or virtual webinar.

Alan's leadership skills borne out through his determination mixed with his consideration of the needs of others gave us all much to think about. His effort in achieving a task that many people could not even begin to consider is truly inspiring.

Alan Chambers' account of the expedition and his leadership insights made us all think very deeply about our roles and what it takes to succeed against the odds. He is human, inspirational and a real coach. Our business will benefit hugely if we apply what we have learnt from him.

We booked Alan Chambers to deliver at our recent Managers Ski Conference, where the focus was creating a mindset on leading as one team and how they manage and coach their team members effectively. Alan really understood the brief and what we were after. The session was engaging and thought provoking through the real life experiences and stories he shared and how he related these to the audience in the room.

The way Alan Chambers was able to link an unbelievable expedition to the top of the world with the challenges affecting each of us on a daily basis was truly inspiring. His passion for team work and belief in the power of individual character left the audience feeling like they could overcome anything.

Alan was an absolute inspiration and the team absolutely loved it. They were completely blown away by Alan, all 170 of them, moved to tears a lot of them and all of them inspired. He was truly amazing.

Alan Chambers gave us an hours presentation on how he got through an unsupported walk to the North Pole – an amazing journey of endurance, skill & strength. There were parallels to be shared and he told us there would be blips and setbacks along our route. After the first test I remembered what he had said.

Thanks again for joining us for our Journey to DP En Route event. The feedback from your talk has been fantastic and the synergies people were able to use to call back to your talk throughout the day really enabled some honest and valuable conversations between our different teams. It was great to meet you and hear your story, I hope you had a safe trip back and trust that we didn’t put you off flying!

Clients often ask about purchasing books for giveaways and delegate packs. Below you’ll find a selection of products by Alan Chambers MBE. Click the images to view on Amazon's website. For bulk orders, please speak with your Booking Agent.

How to book Alan Chambers MBE for your event