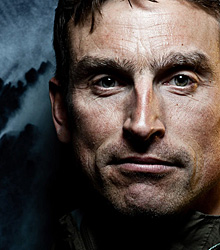 Kenton Cool is one of the world’s leading high-altitude climbers and his accomplishments are staggering. He has reached the summit of Everest sixteen times, holding the record for the most summits of the world’s highest mountain by a non-Sherpa. He was also the first person in history to climb the three Everest peaks – the so-called Triple Crown of Lhotse, Nuptse and Everest – in one climb without returning to basecamp, a feat previously thought impossible. Kenton is the only Briton to have skied down two 8,000m mountains and is a world renowned mountain guide, achieving unrivalled success with his clients.

His accomplishments are all the more extraordinary considering an incident in the summer of 1996 which tore Kenton's world apart.

Whilst climbing in Wales, he broke a handhold on a route aptly called 'Major Headstress' and fell to the ground with such force that he shattered both his heel bones. Initially told he would never walk unaided again, Kenton spent four weeks in hospital, had three operations, three and a half months in a wheelchair and months of rehab. Today he is still in pain and after a long day in the mountains it's not uncommon to see him struggling to walk or moving around on his hands and knees. Yet he still climbs.

'Why do you do it?' people ask him. In his riveting and awe-inspiring motivational keynote speeches, Kenton will tell you why...

Kenton Cool was first introduced to mountaineering when he read about Hillary and Norgay’s first ascent on Mount Everest in 1953. An obsession with rock climbing developed at university and, on graduating, Kenton moved to Sheffield to pursue this further.

Since then, Kenton hasn’t looked back. He has climbed extensively all over the world – establishing new routes and first ascents on peaks in Alaska, France and India. In 2003, he was nominated for a Piolet d’Or award (the equivalent of the Oscars for mountaineers) for a route on Annapurna III.

Kenton is also one of the world’s most sought-after guides, his track record on Everest is the best of any leader. In 2007, Kenton successfully guided Sir Ranulph Fiennes up the North Face of the Eiger before leading him to a successful Everest summit in 2009, and in the process helping to raise over £3 million for Marie Curie. Sir Ranulph said of him “Kenton is one of the finest, and at times the bossiest mountain guide I've ever had the pleasure to sleep with on a 3 foot ledge!”.

In 2011, Kenton became the focus of the world's media after proving that 3G was now accessible on the summit of Mount Everest. He then went on to enter the record books for sending the first and only Tweet from the summit and making many lists of the most epic tweets of all time.

In 2012, Kenton fulfilled the Samsung Olympic Games Pledge by taking an Olympic Gold medal awarded to the 1922 Everest Expedition at the 1924 Winter Olympics by Baron Pierre de Coubertin, to the top of Mount Everest, thus fulfilling a 90 year old Pledge to see one of the medals successfully reach the summit.

In recent years, the Olympic Pledge and the Everest Triple Crown, has cemented Kenton’s position as one of Britain’s most high-profile and celebrated climbers. He is regularly featured on global and national TV media channels, radio and national newspapers along with adventure publications like Outside Magazine and Side-tracked.

Kenton Cool is an engaging keynote motivational speaker, who delivers a range of high-impact and engaging keynote speeches on all aspects of his many accomplishments in the outdoors. He relates with great vividness and emotion the experience of reaching the summit at of some of the world’s highest mountains; drawing highly relevant comparisons between his world and the corporate world in the city.

Kenton’s motivational presentations are energetic, entertaining, inspiring and humorous, focusing on themes of team building and leadership. There is a serious aspect too, as Kenton relates with great intimacy some of the most adverse situations he’s encountered and the personal fears he’s had to overcome across many successful summits of Everest and further afield.

Each presentation is complimented by an impressive array of stunning photographs and video, taken from expeditions right across Kenton’s time in the Greater Ranges.

Extreme Leadership
What does success mean when the price may be too high? Kenton Cool faced this question in extreme conditions on the then unclimbed SW face of Annapurna III. His insights into leadership in extreme times hold audiences enthralled and teach them about the prices and perils of decision-making and teamwork.

Creating a Goal-Focused, Proactive Team
Leading teams into uncertain danger in the mountains (and bringing them back alive) provides valuable guidance about the criteria for a peak performing team. What are the ‘must-haves’ when the stakes are unsettlingly high?

Kenton Cool shares his experiences in the mountains, moving from compelling stories of near-death experiences into deep insights about how to create great teams. Kenton’s keynote is a must-do experience for any team seeking success in today’s hyper-competitive business environment.

Decision Making When It Matters Most
In this keynote presentation, Kenton reveals his approach to decision-making as a leader under extreme pressure, at high altitudes, on unforgiving mountains. He draws on practised lessons that are precisely applicable in today’s deeply competitive business climate.

How do we make decisions quickly when we have little information, when time is against us or when it’s life or death? What do we do when the options are dwindling and less than perfect? How to achieve the same goal by re-calibrating the pathway?

Kenton Cool is, without question, a consummate professional obviously in the climbing world but also in the corporate motivational speaking environment. Both our clients and staff were truly inspired by his story.

Kenton’s achievements are truly exceptional. He can literally and metaphorically get your team to climb to new heights! An outstanding speaker.

Kenton many thanks from everyone at Natilik for the inspirational keynote you delivered at our Anniversary Event. As we aim to be the confident guide in the technology sector for our clients, your many stories of being that confident guide for your clients on Everest were truly amazing and inspirational. Taking the time to talk individually with many of our clients and partners after your keynote was much appreciated.

Kenton Cool was superb! His talk was totally inspiring and motivating and his stories and footage of his summit trips were very impactful. He is so driven and passionate about what he does and this clearly came across to the team and they could relate to many of his examples of challenges he has overcome. Absolutely brilliant and would definitely recommend to others!

Really engaging, inspiring and thought provoking. You’d obviously given the themes a lot of thought and it resonated very clearly with some of the issues we are grappling with across the business (one team, leadership, risk taking etc.)

On behalf of everyone I would just like to say the afternoon session with you was absolutely outstanding – everyone was enthralled by your presentation and the way you made it relevant to business was extremely good. Thank you so much again and you certainly made a huge contribution to what turned out to be our best and most productive conference ever.

Clients often ask about purchasing books for giveaways and delegate packs. Below you’ll find a selection of products by Kenton Cool. Click the images to view on Amazon's website. For bulk orders, please speak with your Booking Agent.

How to book Kenton Cool for your event