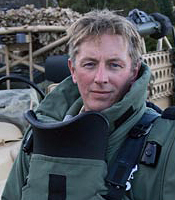 He was so effective at defusing the crude, unstable but deadly devices, that terrorists on both sides of the conflict, Sunnis and Shi’as, put a price on his head. Quite apart from the danger of defusing the bombs, just getting to them was a huge risk, as Chris was a sitting target for snipers.

By the time he arrived in Iraq in 2004, Major Chris Hunter had already notched up 14 years experience in the British Army; he'd seen active service in the Balkans, East Africa, Northern Ireland, Colombia and Afghanistan.

But Iraq was different... despite being shot and wounded in an ambush just four days into his tour, he and his team became so successful at disabling insurgent bombs that the bombers ended up placing a price on his head and designing bombs specifically for him.

Chris also deployed a number of antiterrorist arrest operations in the UK and was the architect of the UK's EOD response to a suicide bomb attack on the UK mainland. Later, he played an instrumental role during the July 2005 London bombings, when he was seconded to the British Government's COBR-A as a suicide terrorism expert.

For his actions during his Iraq tour Major Chris Hunter was awarded the Queen's Gallantry Medal by HM Queen Elizabeth II. His citation read: ‘There can be few other individuals who have so willingly played Russian roulette with their own life to safeguard the lives of others'.

Since retiring from the army as the MOD's senior IED intelligence analyst, Chris has written the acclaimed memoirs Eight Lives Down and Extreme Risk, and embarked on a successful career as a freelance writer and motivational speaker. His highly captivating story about ‘the world's most dangerous job in the world's most dangerous place' makes for a compelling and incredibly moving event.

Major Chris Hunter is a regular contributor to the BBC, Channel 4 and CNN news stations, has an impressive international speaking reputation and continues to expand his TV, radio and media experience. Most recently, he presented a History Channel documentary called Bomb-Hunters and contributed to a number of documentaries, including BBC3's Conspiracy Road trip 7/7 and the docudrama The Taking of Prince Harry.

In addition, Chris continues to support and act as ambassador to a number of military charities, and in 2012 was nominated as one of 15 ambassadors to David Cameron's ‘National Citizen Service' – a young people's initiative to develop young people's leadership and life skills.

As a public speaker, Major Chris Hunter is renowned for his passionate and enthralling motivational speeches. His natural style and exuberant spirit allow him to set an audience at ease whilst keeping them mesmerised and on the edge of their seats throughout the course of the presentation.

His unique and inspirational story offers a powerful message. By capitalising on his experiences in the high-pressure, high stakes world of bomb disposal and intelligence, as well as four years attached to the British special forces, Major Chris Hunter has been able to develop the skills, psychology and life-or-death decision-making processes learned in his former career and translate them to the current needs of the commercial world.

The result is a compelling and highly rewarding experience, offering businesses and organisations a range of unique and alternative methods for taking calculated risks, developing teams and dealing with extreme pressure in every aspect of life.

Delivered with humour and heartfelt emotion, the audience enjoy the lighter side of Chris’ experiences, whilst being encouraged to question their own focus and leaving them with a heightened sense of purpose and a greater understanding of how to achieve their goals.

I would like to express my sincere appreciation for the excellent briefing and support you provided to the Federal Bureau of Investigation. Your briefing was not only exceptionally well done, but also very informative and timely.

I heard Major Chris Hunter speak and can tell you he delivered an absolutely fascinating and relevant presentation; acclaimed by all as by far the best of the many countries represented.

94% of delegates rated the Guest Speaker, Major Chris Hunter, as good to excellent.

I just wanted to say a big THANK YOU for your contribution to yesterday's successful event. Noel also asked me to extend his personal thanks and said that he too was extremely impressed with your presentation. We got loads of feedback forms returned and 100% of them stated that they found the content of your presentation “very interesting”. 95% found the presentation relevant to their organisation. 96% said it covered what they were expecting and 95% said it ran for just the right length of time with 5% saying it was too short.

Thank you so much for organising Major Chris Hunter for our IBM growth day. He was outstanding and he also gave out a couple of books, which was unexpected of him and very good of him.

Chris Hunter went down really well with both audiences. He kept the attention of everyone for the full hour combining the serious with the humourous and I would certainly recommend him to any organisation similar to ourselves.

Chris’ speech captivated the whole audience – meeting all objectives, the speech was interesting, engaging and motivational, highly relevant to our evening in terms of subject and content... The audience were captivated, engaged and interested from start to finish – I have heard nothing but enthusiastic, positive feedback.

Clients often ask about purchasing books for giveaways and delegate packs. Below you’ll find a selection of products by Major Chris Hunter QGM. Click the images to view on Amazon's website. For bulk orders, please speak with your Booking Agent.

How to book Major Chris Hunter QGM for your event