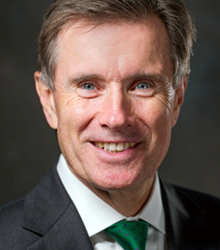 A career diplomat, Sir John Sawers has more than three decades of experience in international affairs, geopolitics and security; having spent 36 years in public service with the British Government culminating in his five-year tenure as head of MI6, the UK’s Secret Intelligence Service.

The latter of which involved dealing with all aspects of foreign and defence policy, working closely with international counterparts. The period included the Kosovo War and work on the Northern Ireland peace process and implementation of the Good Friday Agreement. He was also posted to Washington, South Africa, Damascus and Sanaa.

With his close ties to Downing Street and the foreign policy establishment, Sir John Sawers was the first outsider to be appointed to the Secret Intelligence Service in decades, and was the first head to give a public speech, lifting the veil of secrecy surrounding the notorious agency. He began his career with MI6 in 1977, serving in Yemen and Syria. He then left MI6 and joined the Foreign Office, rising rapidly through the ranks. He served in South Africa, the EU, and Washington DC until 1998.

Geopolitically, that period was dominated by war in Bosnia, crises in the Middle East, and the debate in Britain on the European Union. John then served as the foreign affairs adviser to Tony Blair, covering a period that included the Kosovo war. He also contributed to negotiations on Northern Ireland and the implementation of the Good Friday agreement.

Sir John has extensive experience in international affairs, representing the British Government around the world and leading negotiations at the United Nations, in the European Union and the G8.

At MI6 - an organisation with global reach and impact - as Chief Executive and Chairman of the board, Sir John Sawers took the organisation through a period of modernisation and reform. He was also a member of the Foreign and Commonwealth Office's Main Board from 2003-07.

A keen academic, Sir John Sawers attended the universities of Witwatersrand in South Africa and Harvard in the US. He was appointed Knight Grand Cross of the Order of St. Michael and St. George (GCMG) in the 2015 New Year Honours for services to national security.

After retiring from MI6, he became partner and chairman of a geopolitical advisory firm that provides strategic advice and insights to investors and governments around the world.

A highly articulate, engaging and sought-after keynote speaker, Sir John Sawers is able to draw from his extensive wealth of personal experience in managing the most challenging foreign and security policy issues of the last 20 years, including the rise of China, the evolution of Russia, the threat of terrorism and cyber attack, the changes in the Middle East, and the nuclear negotiations in Iran.

Sir John offers audiences a unique insight into the unpredictable global landscape, the forces and key players shaping the world, cyber security, and how organisations can use this to their advantage. He also remains closely linked in to current affairs through his consultancy work with leaders of corporations, financial institutions, and governments.

Geopolitics and the State of the World
Sir John Sawers’ presentation is a powerful insight to the unpredictable global landscape and how it is affecting the world today. Believing that the ongoing battle for “shared values and order” will most affect the outcomes of our global challenges, he offers insights on the forces and key players shaping today’s geopolitics, the limits of security, and gives practical advice for how organisations can make it work for them.

Sir John draws from his personal experience in managing the most challenging foreign and security policy issues of the last 20 years, including the rise of China, the evolution of Russia, the threat of terrorism and cyber attack, the changes in the Middle East, and the nuclear negotiations in Iran.

Cyber Security
Sir John Sawers understands our nation’s need to adapt to our ever-changing informational landscape and the dangers, risks, and potential rewards of our digital security environment. He looks at the current cyber threats, the policy of cyber security, the likelihood of a wide scale attach, and what organisations can do to protect themselves. As “cyber attacks are not much impressed by international borders”, he also discusses a need for an international approach to cyber security and shares insights on privacy versus security concerns and how audiences should be managing that balance in their own businesses.

Global Investments in a Chaotic World
Sir John Sawers offers audiences a debrief on the state of the world and shares insights on the ramifications of today’s hot spots on our global financial marketplace.

We very much enjoyed having Sir John Sawers to speak at our annual Investor Meeting. His talk was engaging and dynamic. Our investors particularly enjoyed the Q&A. We are grateful to Neil and NMP Live for their ongoing support in identifying and engaging high quality speakers.

How to book Sir John Sawers GCMG for your event