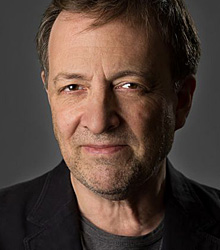 Misha Glenny is an award-winning investigative journalist and international expert on cyber security and organised crime, who made a name for himself as the BBC’s Central Europe Correspondent covering the 1989 revolutions and the wars in the former Yugoslavia.

He has a Sony Gold Award for Outstanding Contribution to Broadcasting and is also a winner of BT’s Information Security Journalist of The Year. His best-selling non-fiction book, McMafia - about the globalisation of organised crime - was adapted into a major TV drama series on BBC1 (UK) and AMC (USA).

Misha is regularly consulted by governments and law enforcement agencies in Europe and the Americas on the Balkans and Eastern Europe; on trans-national organised crime and on cyber security. Misha Glenny began his career as the BBC's Chief correspondent from the Balkans during the war in the former Yugoslavia; covering the socio-political challenges of the region and with the fall of communism during this period began becoming an expert in organised crime.

Traditionally the domain of the international mafia, organised crime has now been eclipsed by cyber security, and Misha's speciality is presenting this issue in a relevant and fascinating socio-political context. More than just an author, broadcaster and academic, Misha Glenny's personal encounters with hackers provide him with gravitas and exceptional insight into the minds of hackers and cyber criminals.

After studying drama and German at the University of Bristol, Misha went on to attended Charles University in Prague. He is a talented linguist and is fluent in German, Slavic and Czech with the ability to understand and speak Portuguese. After his studies Misha Glenny began working for the Guardian, where he worked for three years before moving to the BBC to become a foreign correspondent.

In 1993, Misha won the Sony Gold awards for Outstanding Contribution to Broadcasting for Coverage of the Yugoslav Wars. In 2012, he was awarded ‘The UK Information Security Investigative Journalist of the Year.'

Misha Glenny has spent time as a visiting Professor at the London School of Economics and Columbia University in New York. As a successful author, he has written McMafia; The Rebirth of History; The Fall of Yugoslavia (which won the Overseas Press Club Award in 1993 for Best Book on Foreign Affairs); and The Balkans: Nationalism, War and the Great Powers, 1804-1999, amongst other titles.

He also draws on his background in geopolitics to show how great power relations are driving insecurity in cyberspace and why companies cannot rely on government to shore-up their vulnerabilities.

Misha’s series Putin: Prisoner of Power was one of Audible’s best-selling politics podcasts in 2019 as was his 2020 follow up, The Rise of the Iron Men, looking at the surge in support for Trump, Johnson, Orban, Erdogan, Bolsonaro, Modi and Duterte.

Misha Glenny is an adept and highly sought-after keynote speaker. A former Digital Security Journalist of the Year, he is an author and award-winning investigative journalist with a rich background in organised crime, cyber security, geopolitics, criminology and broadcasting. He illuminates and informs with a uniquely engaging presentational style.

Misha has spoken twice at TED global and is requested internationally to speak at a wide range of corporate functions and events. As a trained actor, his keynote speeches are full of life, passion, experience and a dose of intelligent humour. Popular after dinner and keynote speech topics include:

Cyber Security is Made Out of People
When it comes to protecting your business from cyber threats, expensive digital security systems are only part of the solution. You can build a digital fortress, but you can’t stop your employees accidentally or intentionally letting the bad guys in through the front door.

Based on his interviews with criminal hackers and intelligence agents, Misha Glenny reveals the jaw-dropping social engineering that is employed with great success by many modern ‘hackers’, explains how you can safeguard your business against it, and demonstrates why these techniques are at the centre of a monumental battle between the US, Europe, Russia and China

In a talk that is alternately funny and frightening, Misha exposes cyber threats to businesses while arguing that high-tech digital solutions are only part of the solution. Every member of an organisation, from top to bottom, needs to understand their role in maintaining good cyber hygiene. Clear and engaging internal communication is the key to cyber health.

The Real McMafia — The Rise of Global Organised Crime
HSBC, Barclays, Deutsche Bank... an increasing number of the world’s leading financial institutions have fallen foul of criminals looking to turn their filthy lucre into nice clean cash. But how do they do it? Using clips from his TV Show McMafia, Misha Glenny will reveal staggering details about how organised crime went global, how some of the most spectacular money launderers duped the banks, and what dangers lie in wait for the financial world if this problem is not taken seriously.

From the Russian Mafia to the Latin American drug cartels, Misha explains how the extraordinary growth of global organised crime - which began in the early 1990s - was triggered by the liberalisation of money markets and the fall of communism in Eastern Europe. His keynotes include some jaw-dropping anecdotes gathered from talking not just to intelligence and law enforcement officials, but to the criminals themselves.

Geopolitics - How The Hell Did We Get Here And Where Are We Going?
After forty years of travelling the world and speaking to many of the main players - from Clinton to Putin, from Milosevic to Boris Johnson - Misha Glenny is in a unique position to explain what has really been going on in the world over the past three decades and, most importantly, to predict what risks the future may hold and how we may go about navigating them.

Although most widely-known for his work on global organised crime, Misha has been consulting governments on policy issues and writing detailed modern history for even longer. Is Russia China's friend or competitor? Beyond the headlines, Misha can explain to you why Donald Trump won’t criticise Vladimir Putin. He will also tell you how the Russian President is gently nudging his US counterpart into escalating America’s trade war with China. He will reveal why Germany always seeks closer relations with Russia than other EU countries and why that is bad news for Britain.

If you have ever wondered why odd things happen in the world, Misha Glenny will have already looked behind the teeth and smiles of the photo opportunity to explain what really lies behind the grin.

If you are interested in learning about the Americas, Western and Eastern Europe, Southern Africa, Turkey and the Middle East or Chinese foreign policy, Misha will offer you an eye-opening talk that will always be surprising and illuminating.

Very interesting content and well received by the delegates.

Misha Glenny's forceful and thought-provoking presentation helped impress upon our Board members and senior management on how important it is for an established company to rapidly adjust to the challenges of digitalization and cyber security.

Charming, knowledgeable, entertaining, happy to spend time with the delegates. Self-sufficient and professional...

Very polished, kept to the brief and delivered an interesting and thought provoking speech. He formed a good relationship with the dinner host which really helped. Delighted we chose him!

Absolutely fantastic, and his views on the human communication element of cyber defence really resonated with our audience.

Clients often ask about purchasing books for giveaways and delegate packs. Below you’ll find a selection of products by Misha Glenny. Click the images to view on Amazon's website. For bulk orders, please speak with your Booking Agent.

How to book Misha Glenny for your event