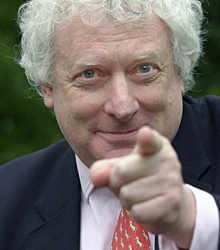 Jeffrey Robinson is an old fashioned story teller, international best-selling author of 30 books including four major exposés on financial crime, a frequent guest in the media on both sides of the Atlantic, and a former winner of the Benedictine After-Dinner Speaker of the Year Award.

He is a native New Yorker who lived in Europe between 1970 to 2007, including 25 years in London. It was during these 25 years in the UK - writing, speaking and appearing on TV about money laundering and criminal finance, that the British Bankers' Association named him, “The world's leading financial crime author".

Jeffrey's international reputation was greatly enhanced by his investigative tour de force, The Laundrymen - Inside The World's Third Largest Business (1993), which was a headline-maker in 14 countries. In it, he uncovered the true extent of global money laundering and showed how hundreds of billions of dirty dollars are derived mainly from the drug trade, then reinvested throughout the world by otherwise legitimate businessmen, lawyers, accountants and bankers.

Next, in The Merger – How Organised Crime is Taking Over The World (1998), Robinson described how transnational organised criminals have built multinational corporations to become the most powerful special interest group on the planet.

Five years later he published the third book in this series: The Sink - Terror, Crime and Dirty Money in the Offshore World. Here, he lifted the lid on the lawyers, bankers, accountants, company formation agents and despots who created - and actively sustain - a world of window-dressing regulations where criminals and corporate giants live beyond the reach of governments and the law.

His expertise on worldwide fraud and money laundering has made him a much sought after commentator by the media. Some of the issues he discusses include the lessons legitimate businesses can learn from organised crime; how businesses today are prime targets of fraudsters because most businesses are looking in the wrong places to protect themselves; why one in nine people will lose money this year as a result of fraud and what they can do to protect themselves; and the ways that terrorists are financing their activities while governments sit helpless on the sidelines.

Jeffrey Robinson is a graduate of Philadelphia's Temple University (1967). However, he began selling freelance articles and stories to small magazines before his 15th birthday, and during the university years went on to write for a popular weekly children's show and was on the writing staff of a nationally televised daily talk show.

He continued working in the media during his four year stint as an officer in the United States Air Force from 1967-1971. Charged with running a press and public relations office for five generals at the height of the Vietnam War, he hosted a weekly talk show, scripted and directed several film projects, wrote short stories for national magazines and moonlighted as a disc jockey on local radio.

When his military obligation was completed at the end of 1970, he took up residence in a small village in the south of France. Using that as his base, he vagabonded around the world, writing articles and short stories for leading North American and British periodicals.

In addition to books on dirty money, Jeffrey Robinson has published investigative non-fiction, major biographies and novels. These days, dividing his time between New York and London, he continues to write books, scripts for television and to appear in the media on both sides of the Atlantic in addition to being highly sought-after on the keynote and after dinner speaking circuit.

Jeffrey Robinson is the bestselling author of 30 books, and a popular speaker on the international after dinner and conference circuit.

Drawing on material from his books, the research that has gone into them and his unique access to the inner-workings of international business - both legal and criminal - Jeffrey Robinson is a dynamic, charismatic, amusing and uniquely effective speaker.

His current keynote speech topics include:
• Crime, Terror and the Care and Feeding of Dirty Money
• Fraud Pandemic - Protecting Your Business and Yourself
• Lessons Legitimate Businesses Can Learn From Transnational Organised Crime
• A Brief History of Dirty Money, and Why Money Laundering Still Matters
• You’re Where the Money Is – Which Is Why Most Financial Fraud is “Insider”.
• The Franchising of Terrorism and The Money Behind it

The feedback from all re Jeffrey Robinson was very positive, and no negatives, and I think we hit the spot. Jeffrey was a pleasure to work with, easy going and came across very well both during and after his talk…he certainly opened a few eyes and ears!

If there’s one man on this earth who should be listened to in respect to Global Money laundering... it’s Jeffrey Robinson. Straight talking truths, told with passion and expertise.

Clients often ask about purchasing books for giveaways and delegate packs. Below you’ll find a selection of products by Jeffrey Robinson. Click the images to view on Amazon's website. For bulk orders, please speak with your Booking Agent.

How to book Jeffrey Robinson for your event