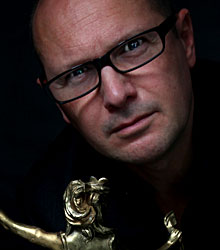 With over 30 years experience as an antiques dealer and forgeries expert, Curtis Dowling is highly respected as a leading International authority in his field.

But the specialist area of fakes and forgeries detection isn't limited to the world of fine art and antiquities. Popular con-artist TV shows such as BBC1's Hussle aren't a million miles from what happens in the real world. So whatever your industry, whether it's retail, insurance, finance, manufacturing or the services trade, you can never be too vigilant and aware of scams and cons that could potentially ruin you or your company.

After all, we've all received those dodgy emails from Nigeria telling us we've won £10,000,000 (technically known as the 419 scam) and one in five of us - that's 20% of the UK adult population - have been the victim of identity theft!

Investors, law-enforcement agencies, museums, private art companies and the insurance trade regularly book Curtis Dowling to speak at their events and also confirm both the authenticity of art and antiques they are considering buying, and to purchase key pieces for their collection, or investigate lost/stolen items.

'It never happens here' is the mantra of all the major brands with whom Curtis Dowling works, and no doubt you've also thought 'it will never happen to me' about something... the truth is it does happen and sometimes you don't even know it.

Take GUCCI Sloane Street as an example. Real handbags were purchased mid-week from the flagship London store and fakes then put into the original GUCCI packaging. On Saturdays when the staff were generally a great deal younger and less experienced, these fakes were returned to the store for a full refund. Once restocked on the shelves, over the course of the following weeks it unravelled that GUCCI Sloane Street themselves were carrying fakes and selling these to their innocent customers.

So all retailers need to be aware, it does happen to everyone from NEXT right up to Cartier.

Curtis Dowling was 'discovered' when a television producer from BBC's The One Show attended one of his lectures at Belchamp Hall in Suffolk. This led to an appearance on the programme where he spotted fake Beatles memorabilia in Liverpool. 'Inside Out' on BBC1 followed quickly. This time Curtis put his own faking skills to the test and successfully fooled individuals from the Churchill Archives & created more believable fakes for Inside Out London a little time after creating authentic looking Titanic items.

Curtis then went on to become one of the resident experts on BBC1's popular daytime series 'Sun, Sea and Bargain Spotting' travelling across Europe to find bargains to sell back home with his contestants.

He worked alongside Duncan Bannatyne for BBC2's prime time series Beat the Bank. As the antiques and art expert, Curtis was in the race to turn a healthy profit on Bannatyne's money. He has also appeared as an expert on BBC1's hit daytime show Cash in the Attic and Cash in the Celebrity attic and two series of presenting the ever-popular BBC1 Put Your Money Where Your Mouth is, before turning his attentions on TV back to his true field of expertise fakes, scams and forgeries with appearances on 'Rogue Traders' and Fake Britain and Channel 5's Live From Studio 5.

Curtis was the consultant for the critically-acclaimed 2012 Channel 4 documentary "Elizabeth Taylor: Auction of a Lifetime" and the presenter of BBC's 'Hidden Paintings'.

Whether you’re organising a conference and looking for an original, informative and entertaining keynote presentation, or simply after a light-hearted and anecdotal talk about the murky world of identity theft, scammers, con artistes and rip-off merchants, Curtis Dowling will take you on a fascinating journey of discovery to find out what is real and what is not quite what it seems!

How to book Curtis Dowling for your event