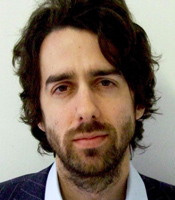 Jamie Bartlett is a journalist and author who’s primary work focuses on the ways in which social media and modern communications and technology are changing political and social movements, with a special emphasis on terrorism and radical political movements.

In 2014 Jamie authored The Dark Net, an examination of the hidden corners of the Internet; its strange subcultures and the protagonists that inhabit it – from trolls, Bitcoin miners, political extremists and members of the hacktivist group Anonymous, to pornographers, drug dealers, computer scientists and neo-Nazis. In researching his book, Jamie spent a substantial amount of time embedded with these characters, comparing their real life personas with their online avatars. The Dark Net offers a startling glimpse of human nature under the conditions of freedom and anonymity, and shines a light on an enigmatic and ever-changing world.

As Head of the Violence and Extremism Programme and the Centre for the Analysis of Social Media at the think-tank Demos, Jamie has researched and written extensively about radical political parties and movements across Europe. He also writes on technology for the Telegraph and for several other publications on how the internet is changing politics and society.

Prior to this, Jamie Bartlett was a research associate at the international humanitarian agency Islamic Relief and conducted field research in Pakistan and Bangladesh. He holds Masters Degrees from the London School of Economics and the University of Oxford. He writes frequently in a number of national and international outlets, including The Telegraph, The Guardian, and the Sunday Times.

Clients often ask about purchasing books for giveaways and delegate packs. Below you’ll find a selection of products by Jamie Bartlett. Click the images to view on Amazon's website. For bulk orders, please speak with your Booking Agent.

How to book Jamie Bartlett for your event